I walked down a 5,000-year-old street Sunday. Some roads in Rome look that old, but Via Latina really is 5,000 years old. Roman armies once marched down Via Latina toward Southern Italy. How old is Via Latina? You know Via Appia Antica, the famed street where Spartacus’ slave revolt (See: Failed Labor Strikes) ended with his slaves hanging from crosses along the side of the road?

Via Latina is older.

I walked down the street with Rome Explorers, Rome’s fabulous Meetup group that finds every interesting historical nook that isn’t in a guidebook. At one time, Via Latina was 115 miles long, stretching from Rome to the vicinity of what is now Naples. It ran parallel to Via Appia which was built 20 years later and was the first exploration leg of what would become the most powerful civilization in man’s history.

We met at the edge of a park only 300 meters from Via Appia on the southeast outskirts of Rome. The road is little more than a stone path about three meters wide, just wide enough for two horse carts to pass each other in 50 B.C. Via Latina (Latin Road) goes slightly uphill between rows of graceful Mediterranean pine trees standing like sentries. The sun was out. A cold breeze whipped through the pine trees’ bushy branches.

Leading the tour was Rome’s uber guide, Massimiliano Francia. “Max” is bilingual and his knowledge stretches to a personal library of 100 books about Roman history. He has a particular interest in little-known peculiarities of death. It was Max who told me scientists claim crucifixion is the most painful of deaths, as the man slowly suffocates from his bones collapsing while hanging for 24 hours. It was Max who told me Roman Empire street gangs would start fires in the ghettos then jump through the smoke to knife firefighters.

I can’t think of a better person to give a tombs tour. (Unabashed plug: Anyone interested in his tours around Rome, www.Romeww2tours.com, can contact him at guideromax@virgilio.it.)

Standing in a stylish white Italian wool sweater and a very unfortunate Lazio F.C. ballcap, the otherwise intelligent Max explained why this one-time peninsula thoroughfare became somewhat of a long graveyard. People who chose to be buried here were Ancient Roman aristocrats. They were politicians and leaders in society. They didn’t want to merely die and be forgotten. They wanted their tombs to be mini monuments. Resting for eternity along Via Latina ensured travelers would stop and look.

However, they often did more than look. Sometimes visitors would walk into the tombs for sex. Other times they would urinate. Hopefully, they weren’t the same people at the same time. At one point, the city of Rome put up a sign and prayed off the citizenry’s superstitions by inscribing, “Urinate, and you will DIE tomorrow.”


The tombs range from the 2nd century A.D. to the 19th century. The first one we came across was a giant block of stone about 20 feet high. Here is mentioned Pope Pius IX, the pope who supported excavating the site when it was discovered in 1857-58. Unfortunately, Pope Pius IX was a complete dick. Italy had become a unified nation in 1861 and in 1870, he refused to accept laws that guaranteed freedom of religion. He died in 1878 and remained the longest-reigning elected pope in the history of the Catholic Church at 31 years until John Paul II surpassed him with 33 years in 2005.

We then came across a two-story structure that looks like a small Greek temple with two ionian columns holding up an upstairs sporting a huge window. This is the Tomb of Valerii. Valerii, however, was one of the oldest Roman families dating back to the 8th century B.C. So powerful was the Valerii family that they’re the only family to allow windows to open out to the city instead of inward toward the room inside. They were the only family to have relatives buried inside Rome. They were allowed to be buried instead of cremated, the tradition at the time. Ben Hur of chariot and Hollywood fame was a good buddy of Valerio Messalla, one of the Valeriis.

We climbed down a narrow, dark staircase into a huge room of white marble. Diagrams of sea deities accompanying souls to the islands of the blessed decorated the walls. A large marble sarcophagus sits like a giant slab at the edge of the room. Seven other sarcophaguses were taken to the Vatican Museum. Curiously, however, this tomb does not hold the remains of a Valerii. They were removed long ago.


Nearby is the prettiest tomb on Via Latina. I’ve been to the ancient Egyptian tombs of Luxor and inside the Great Pyramids outside Cairo. The Tomb of the Pancratii family rivals it. It has been called the “Sistine Chapel of Ancient Rome.” The walls and ceiling are a collage of turquoise, red and purple designs depicting the escapades of Homer. But on the ground lies a giant stone sarcophagus that defies the beauty above it. Max handed 11 of us a light and we leaned down to look inside an opening. In the far right-hand corner lies a skull. No one knows who it was but the Pancratii family was familiar with death.

This dates to the 3rd century A.C. when gladiator battles were a major source of Roman entertainment. However, the name of the family comes from a warped fighting sport called Pankanration and the family name suggests the founder may have been a star. I’ve studied gladiator culture. It was more brutal than the movie ever showed.


“This was worse,” Max said. “Gladiators can die in one second. These fights can last all day.”

A little farther up the road, we came across the brick remains of what looked like a large building. This was a rest area where visitors could eat in a restaurant, rest their horses and take a shower. However, it’s fortunate they didn’t have menus back then. Max explained that in a restaurant like this, they may have served something unusual. 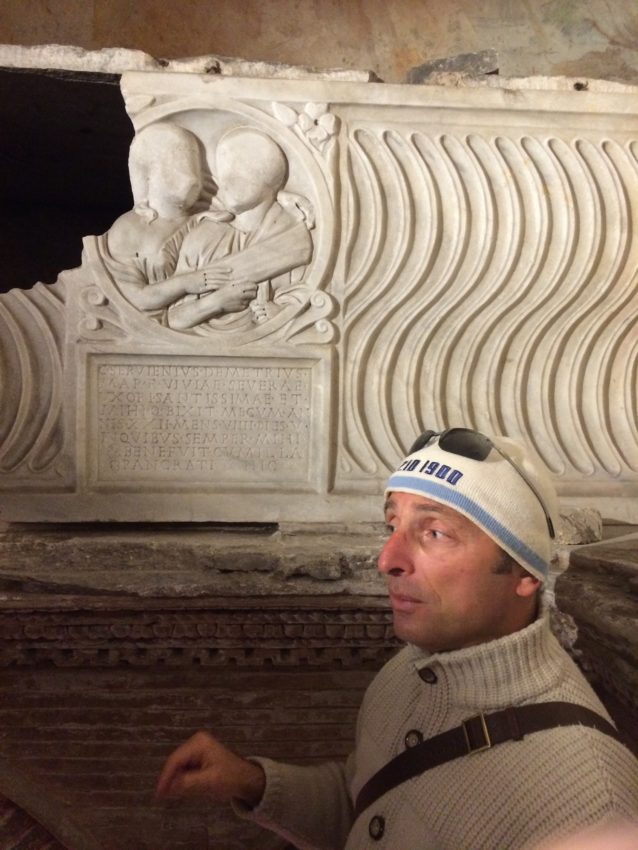 That’s right. Owners of the restaurant would kill their customers, likely with poison, and serve the meat the next week. Hey, beef was expensive back then. He showed a diagram of three boys soaking in brine. I asked Max if the boys were Lazio fans.

“They never served A.S. Roma supporters,” he said. “They were poisonous: Eat and go away.”

Near the end of the road is the Barberini tomb, named for Maffeo Barberini, also known as Pope Urban VIII. His spending nearly drove the church into bankruptcy during his reign from 1623-44 but that didn’t stop him from buying the huge tomb of the famed Cornelii family made of yellow and red brick and tufa, original volcanic rock.

Afterward, we all gathered at a guest’s apartment in suburban Merino, famous for its white wine and leafy streets. We talked about the usual topic of Rome residents: the difficulties and pleasures of life in Rome and how around every corner there is a new discovery. For our ancient predecessors, they were the ones who wanted to be discovered.