Teatro di Marcello sits on a hill connecting the Tiber River to Piazza Venezia and Vittorio Emanuele, the monument that looks like a giant wedding cake. When I first visited Rome in 1978 as a 22-year-old backpacker, I thought Teatro di Marcello was the Colosseum. No one could blame me. It has the same round formation, the same shaped porticoes, the same dark aura. I remember staring at it for hours wondering about the bloodletting that went on inside those stone walls. I wondered if I was standing in what was once the path of gladiators.

Turns out, I was probably in the path of poets and hack comics.

I took a guided tour today of three of Rome’s oft-overlooked sites, all of which remain close to my heart: Teatro di Marcello, the Jewish Ghetto and Tiberina Island. Since I moved to the nearby Testaccio neighborhood a year ago, Teatro di Marcello has been my bus stop where I oft wait until the wee hours of the morning to be whisked along the Tiber River and home. I’d stand there with a collection of Bangladeshi kitchen help getting off work and tipsy teens and look into the darkened windows of the old theater. But not all of them are dark. The top floor is now apartments. Talk about a room with a view.

Conducting the tour was Massimiliano Francia, the best guide in Rome, a man whose vast knowledge makes me wonder if he actually knew Nero personally. Organized by my favorite Meetup group, Rome Explorers, we gathered at the front gate of the theater with a massive group of more than 30, many of them Romans. I love how Romans, despite their economic crunch and sometimes woeful lives, still love their city and have thirst to learn about it.

Here’s a glance at what we learned:

Did you know the Romans were vicious theater critics? They made the writers in New York look like Dr. Seuss. The Romans hated tragedies. Why? They hated the Greeks, and the Greeks invented tragedy — which they have continued to this day with their economy. In fact, Greek philosophers were banned from Rome. What philosophy did the Romans need? They controlled land from Great Britain to Persia and had 300,000 slaves working for them.

Then Max added, “You think anything has changed?”

But back in the early years of the Roman Empire before Christ, Rome was awash with theater. They were made of timber for easy disassembly and reconstruction.

It wasn’t until Julius Caesar bought the real estate when a permanent theater was planned. He was murdered in 44 BC before the first standing ovation and Augustus completed it in 13 BC. It’s called the Father of the Colosseum and you can see the resemblance. Picture the Colosseum holding 20,000 people instead of 50,000 and you have Teatro di Marcello.

It turns out the Colosseum was bad for business. After it was built in 80 AD, emperors used gladiator battles and mass Christian executions to garner votes from the populace, or “mob.” When fights were announced, the Teatro di Marcello would empty and people would race the mile or so up what is now Via dei Fori Imperiali to see blood. The actors also saw blood but only in their anger.

The third and highest floor were apartments in the 16th century, including one owned by Prince Orsini, a nobleman and one of the most important figures during the Italian Renaissance. Today, the flats are still available. I’m hoping they’ve changed the plumbing.

The Jewish people have a long tragic history in Rome, as the name of their neighborhood might suggest. However, it wasn’t always this way. The Jews have inhabited Rome longer than anyone, having arrived here 22 centuries ago. At the time, they were beloved by the Roman aristocracy. Julius Caesar well remembered how they protected him from murdering Greeks when he came to Egypt to shtoink Cleopatra. In fact, one time a Roman magistrate stole money sent from Rome to Israel. Caesar immediately threw the thief in jail. Rome even used money from Israel to help build the Colosseum.

Benito Mussolini didn’t even hate the Jews. He loved them — some of them, at least. He had a Jewish minister of education named Margherita Sarfatti with whom he had an affair. Many of the Italian soldiers he sent to conquer Ethiopia came back with Ethiopian wives. “Fascism,” Max said, “wasn’t born as a party that discriminated.”


Of course, that was about the extent of Jewish highlights in Rome. In the 1st century B.C., Titus sacked Jerusalem and deported many of the Jews to Syria and others to Rome. From 1555-59, Pope Paul IV ruled Jews had to live in what remains about a six-block area just on the north side of Teatro di Marcello. They had to remain inside from sunset to sunrise and wear a particular blue-green color to distinguish themselves from the rest of the population. He also made them go to their own school near the Colosseum and no one could own their own business. They remained in the Ghetto until the end of World War II. It wasn’t until Mussolini was arrested in 1943 when the Germans began dragging Jews from the buildings we walked past and taken to concentration camps. 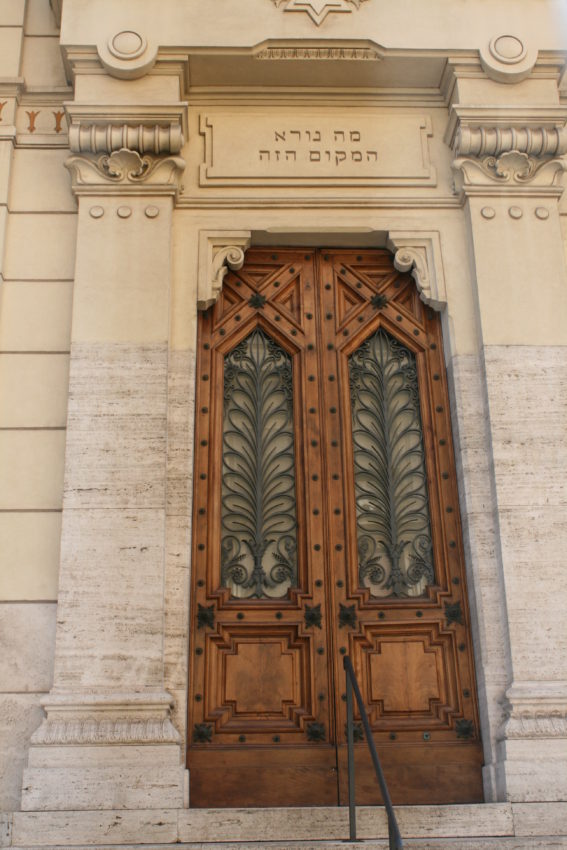 For my first two months in Rome last year, I lived about a half mile from the Ghetto. It remains one of the quirkiest neighborhoods in Rome. It may have the narrowest streets. They’re a windy maze snaking between tall apartment buildings that date back to the Renaissance. It’s actually quite a romantic stroll in which the traffic on nearby Lungotevere can not be heard and the only sounds are the soft padding of feet on ancient cobblestones. Anchoring the neighborhood is the golden synagogue, relatively new considering the construction date of 1904. 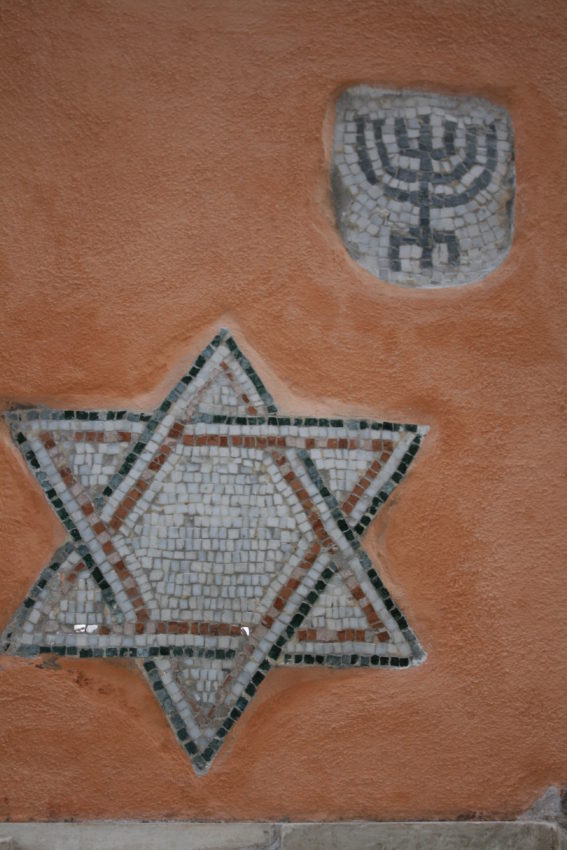 The Ghetto is a great place to eat. The most famous may be Il Giggetto, which is tucked in the corner at a crossroads of alleys. Max said, however, it has hit the skids since the sons took over for their father who passed away. Instead, along narrow Via del Portico D’Ottavia, which forms somewhat of a main drag, is what Max says is No. 1: Nonna Betta. No. 2 is Il Giardino Romano right nearby. In this neighborhood you can get gourmet kosher cooking such as fried brain. There’s also salmon risotto and lasagna with artichokes. And don’t forget the codfish with onions.

This neighborhood is still populated by much of the Jewish population. It has been constantly guarded — especially these days. It has not escaped the people here that ISIS has announced it is moving closer to Rome.

I’ve written about Tiberina before, particularly over the summer when I spent many a night drinking a glass of wine while seated next to cascading rapids of the Tiber River. At night, the Tiber racing past the Tiberina could pass for the Arkansas back in my old stomping grounds in Colorado. Tiberina remains one of Rome’s jewels. It is the longest continuously inhabited island in the world. First established in the 3rd century BC, it served the sick and feeble during the Roman Empire. To this day, the Ospedale Fatebenefratelli dominates the 270-meter-by-67-meter island like a castle.

What I didn’t know is the bridge I always walked across to party on it is the original Ponte Fabricio built in 62 BC. I also didn’t know why the statue of St. Bartholomew, whose church he’s in front of bears his name, is holding a knife. He was considered one of Jesus’ 12 Apostles, and the Romans skinned him alive in the 1st century AD.

The Romans often threw the bodies of dead slaves into the Tiber from the island. That practice ended when the Romans received a first-hand lesson in biology after a few dozen decomposing corpses started washing ashore on particularly hot days.


Today the church holds a cannonball fired by Giuseppe Garibaldi while defending Rome against Napoleon. The ball never exploded which may have been a good omen for all the sick who are continually hauled here. Meanwhile, lovers continue to stroll the modern walkway ringing the island and immigrants sell cheap trinkets on the bridge. Palm trees and European Pines give the place a true island feel, a separate if tiny piece of paradise from the chaos of Rome.