Travel guide to Castelli Romani: Hidden gems in the hills southeast of Rome


ARICCIA, Italy — I don’t want to turn this blog into a travel guide. This blog is about experiences, not information. But I have to switch gears this once. I have recently been touring an area outside Rome that I just can’t keep to myself any longer. It has been around for 2,000 years, inhabited by emperors and popes, ogled at by Romans and savvy Europeans. But very few Americans ever get out of Rome to marvel at this extraordinary area.

It’s called Castelli Romani. It’s a series of 14 small towns, most sporting castles (thus, the “castelli” in the title) and perched on hillsides or cliffs among the picturesque Alban Hills southeast of Rome. They were once used as defenses against a Pac-12 lineup of foreign invaders but now offer some of the best views in Italy.

I toured them in friends’ cars but they’re accessible by public transport from Rome. If you get tired of the heat and crowds of Rome and want to taste true rural Italy less than an hour away, not to mention fantastic local cuisine, grab some adventure and a bus. Castelli Romani is worth the planning. Here’s a list of six towns I fell for with public transportation available:


Ariccia. It’s home to the best porchetta in Italy. Porchetta is the sizzling, suckling pig that is slow roasted for four hours and then served in homemade bread or wrapped in paper to pick at with your hands. As I strolled down a street toward its spectacular cliff-side vista, nearly every store had an entire pig, roasted brown-maroon, lying prone on a slab. They were carved from the rear forward. The pigs’ eyes are thankfully shut as if they can feel the knife cutting off their flesh.

I walked up one street on a hill lined with porchetta-themed restaurants with outdoor seating and barkers outside luring in patrons with menus and descriptions of sizzling pork. I thought I smelled a hint of porchetta perfume on one of them.


In two recent visits I ate enough to last me through lunch the next day. The servings are massive. I felt like I was in the American Deep South except nothing was fried and the people weren’t obese. I went to a highly recommended restaurant called Gasperone. It’s on a narrow curved street that’s lined chock-a-block with porchetta restaurants. I ordered the mixed antipasti which usually is just a mix of finger food. At Gasperone, they nearly needed a gurney to bring it all out. The lineup: porchetta, buffala mozzarella, ricotta buffala, three different kinds of sausage (including horse), pancetta (bacon), cheese-stuffed sausage, prosciutto, salami, bruschetta with sausage and bruschetta with spinach. A big basket of fresh homemade Italian bread, the kind with the hard crust and spongy insides, made mini nice sandwiches.

It’s considered uncool not to order a first dish, called a “primo piatto,” at these places. It’s also uncool to eat pasta when you feel ready to explode. But I ordered the pappardelle (wide, flat noodles) with cinghiale (wild boar). It was so delicious, I somehow found room, like a man digging underground to find a place to hide more stolen treasure. 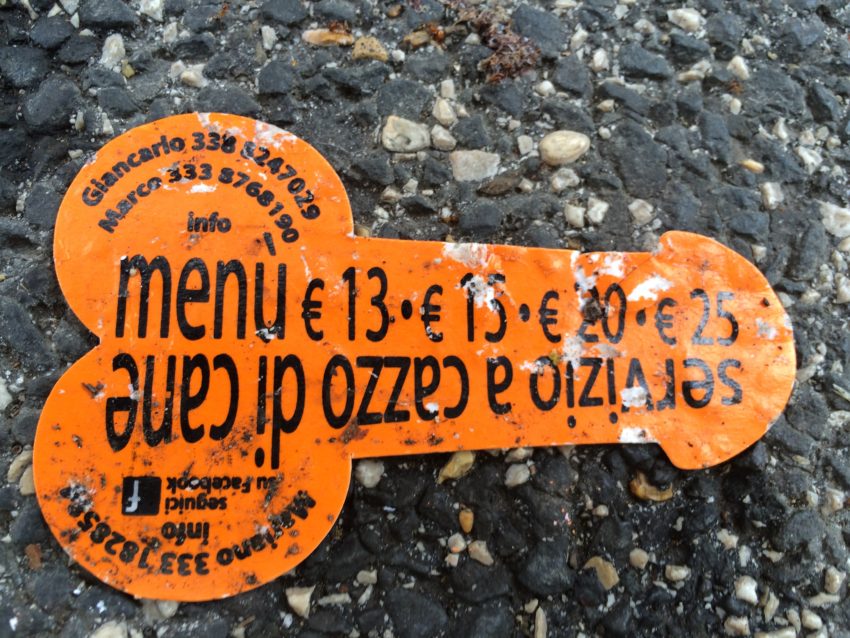 The food almost took a back seat to the waiters’ sideshow. As I digested, they plied me with free shots of Amaro, Italy’s herbal liqueur that’s up to 40 percent alcohol. To give you the idea of the taste, “amaro” is Italian for “bitter.” Meanwhile, I kept a running dialogue with the waiters, none of whom spoke English. They said no European tourists come here, let alone Americans. It’s all Romans trying to get into the cool hills to stuff themselves.
As we talked about life in Rome, they gave me a quick lesson in Romanesco, Rome’s impossible dialect which is the language of choice in my Testaccio neighborhood. I learned a new word, which I can’t use in public but I can here: “smorzacandela.” It’s the sexual position when the woman is on top. Why “smorzacandela”? That’s the name of the round devise Italians use to put atop candles in order douse the fire. Get it? When I walked inside toward the bathroom, I told the cooks working behind the counter that I learned a new word. I yelled: “SMORZACANDELA!” Suddenly two of them, utensils in hand, leaned backward, laughed and pumped their fists up and down by their waists as if pushing a woman up and down.

Yes, Romans are nothing if not romantic.


One of Ariccia’s most interesting traits is its famous bridge. It’s not famous for its views. It’s famous for suicides. So many people threw themselves off the bridge to the forest 60 meters below, the town erected steel netting on both sides to stop the trend. Nevertheless, some people will just kill themselves in attempt to kill themselves. On May 29 a 57-year-old woman and her 31-year-old son drove up from Rome. They climbed over the railing and hopped onto the netting. As police ran toward them yelling to stop, they threw themselves into the void. Not to say the landing was rough, but their bodies, when found, were unrecognizable.

How to get there: Take the Rome Metro subway’s A Line east all the way to the end at the Anignina stop. Exit the station and take the COTRAL bus which leaves for Ariccia every 30-40 minutes. The 2.50-euro ride takes about 40 minutes. Get off at Largo Savelli. Buy a round-trip ticket as tickets may not be available in Ariccia.


Nemi. On the east side of Ariccia is Lago di Nemi, a volcanic lake 30 kilometers from Rome. On the east side of the lake is the lovely, charming town of Nemi. Its cliff-side perch offers unbelievable views of the crystal-clear lake below. The Italian national mountain bike championships were being held the day after I arrived so a buzz drifted through town. Fit men and women in Lycra whizzed around on fat-tired bikes while a talented teenage couple sang on a makeshift stage.

I walked halfway down the tree-lined sidewalk toward the lake. It has enchanted Romans since the Roman Empire. In fact, Emperor Caligula (37-41 AD) built a large, expensive barge with elaborate yachts. When his enemies offed him on Rome’s Palatine Hill, the boats were sunk. Benito Mussolini salvaged them but a fire destroyed them 1944. The hulls, however, survived and can be seen in the Museo delle Nevi Romane.


The town wraps around the cliff and looks like a gingerbread village. Maybe it’s the proliferation of strawberries that gives it such a sweet feel. Nemi is famous for having arguably the sweetest strawberries in Europe. The sides of the lake’s volcanic crater, as it turns out, are perfect for growing strawberries. They protect them from the elements. Nearly every store had strawberries in some form: strawberry liqueur, strawberrycello, strawberry tarts, strawberry jams, strawberry creams, strawberry grappa, strawberry bread. I had a strawberry “tortine,” or tart, a tiny droplet of cream topped with little pieces of strawberry in a little bitty pie crust. Cold right out of a bar’s chilled display case, it was the perfect opener to the pappardelle and wild hare I had for dinner.

How to get there: Again, go to the Anignina stop. Take the COTRAL bus to Genzano di Roma then change buses to Nemi. They leave about every 30 minutes but watch out. The last return bus from Nemi to Genzano leaves in early evening.


Genzano di Roma: If you go to Nemi, be sure to hang around Genzano first. It is famous for its bread which, legend has it, the clean air drifting in from the nearby Tyrrhenian Sea makes especially flavorful. Many stores have big wood-fire ovens that produce big, black, hard-crusted loaves of warm bread.

During the Roman Empire, wealthy Roman citizens lived here for the cooler altitude and healthier air. Emperor Antonius Pius (138-161 AD) was born here. The castle was built in 1235. Today, it is a bustling, commercial town
where cafes are packed with local gossip and locals walk around with loaves of bread in their arms.

I walked up one street featuring a big fountain. Every June, this Via Italo Belardi is covered with flowers in an annual festival called Infiorata. Women wear traditional clothing and locals spend days ahead of time building elaborate flower formations. Hans Christian Andersen once wrote of Infiorata, “The whole street is a carpet of flowers … Not even a breath of air moves and the flowers lie on the ground as if they were heavy precious stones…”

How to get there: COTRAL buses go direct from the Anignina stop.


Castel Gandolfo. If you want to know what a pope does to relax when he’s not blessing pilgrims and sainting priests, come to Castel Gandolfo. On the shores of Lago di Albano, the pope’s summer residence can be seen anywhere along the lake. It is a 17th century castle complete with a helipad. Pope John Paul II, or, as I call him, The Deuce, came here a lot during his reign from 1978-20??. He held audiences here in July and August.

Unlike St. Peter’s, you can’t enter. Just marvel at it from Piazza della Liberta. Walk around the cute medieval town. Wander down the paved pathway to great vistas of the lake below. Then realize something: It’s good to be pope.

How to get there: Direct trains leave Rome’s Termini station. The trip takes less than an hour and be alert: The Gandolfo station is not clearly marked.


Rocca di Papa. Named for Pope Eugene III, who lived here, it lost its castle to French troops in 1541 and the city center was bombed to rubble in World War II. It has a roasted chestnut festival in October and is the home of the Parco Regionale dei Catelli Romani, one of the prettiest parks in Lazio, the name of Rome’s region.

I found it interesting for the people. Rocca di Papa is difficult to reach. It is isolated during bad weather and it snows in winter. Word is, because of its isolation, incest is common. I did notice as I walked down the narrow, cobblestone roads that people looked at me funny. They’d tilt their head and stare at me with a lazy eye.

Then my friend who drove me there said, “Some of the people here aren’t quite right.” Just as I heard those words, I heard a woman from an apartment window above me yell at someone inside, “VAFFANCULO!” (GO FUCK YOURSELF!)

How to get there: At Anagnina, take the bus marked “Rocca di Papa via Via dei Laghi.” There are four on weekdays, three on Saturdays and two on Sundays. Get off at Via dei Laghi and walk 20 minutes to Rocca di Papa.

Frascati: This is one of my favorite places in Lazio for a picnic. It is a fast, direct train ride only 12 miles from Rome and, next to Ariccia, has the best porchetta in Italy. Its large piazza is lined with fast-food porchetta stands and they all serve the famous, fresh, crisp Frascati white wine perfect for a lunch in the nearby park.

Frascati is more famous for the villas that popes, cardinals and Roman nobles started building in the 16th century. Hike up the hill to Villa Aldobrandini where one are on the grounds is lined with giant statues of Roman gods.

How to get there: Direct trains leave from Termini every 30 minutes.