Trieste is one corner of Italy I can avoid — like James Joyce, its adopted son


TRIESTE, Italy — I am tucked, crammed, seemingly locked in a corner of Italy. Below me is the Adriatic Sea. Behind me is Slovenia. Just south of me is Croatia. I am surrounded by a frigid cobalt sea and former Soviet satellite states just wiping their eyes from various levels of war and conflict.

Somehow, the city of Trieste has kept its Italian charm although, like many Italian models and actresses, its beauty is a bit overrated. I’d been to 16 of Italy’s 20 officially designated regions and had saved the confusing, convoluted Friuli-Venezia-Giulia for some special time. Why? The crown jewel of this region hugging the northern coast of the Adriatic isn’t Venezia. Venice has nothing to do with the Venezia region. It’s Trieste. My Roman friends wax on about it as if it’s Italy’s version of Atlantis. It has the largest seaside piazza in Italy. It has terrific remains of a Roman amphitheater and an arch commemorating England’s King Richard who allegedly passed through here on his return from the Crusades. Even one of my former female Italian instructors marveled about the long-legged women.


So I made Trieste the second stop of a May Adriatic tour. I had three goals: to knock off No. 17 from my around-Italy tour, to confirm Trieste as one of the most beautiful cities in a country full of them and to desecrate any memory of a tormentor of my college lit classes and a Trieste native for 16 years, James Joyce.

To find Trieste, trail your finger up Italy’s east coast, go through Venice (caressing it a little bit just out of pure affection), go east along the top of the Adriatic coast and, as soon as it dips south, you’ll find Trieste. It is nearly surrounded by Slovenia. In a really weird bastardization of international boundaries, after World War II this area was carved up like a drunk sailor on Thanksgiving. A member of the Austro-Hungarian Empire for decades, Trieste was fought over by Italy and Yugoslavia fought until 1954 when it was awarded to Italy and Yugoslavia got the surrounding area.


So excited to see the famed Piazza dell’Unita d’Italia, I spent all 16 months in Rome avoiding any pictures of it. I nearly soldered the pages of tour guides in the Trieste section to avoid spoiling the surprise. So the day after taking the train from Venice, I took the bus down the hill from my AirBnB to Trieste’s huge port. I walked along the water about two blocks, saw the vastness of the famed Piazza dell’Unita d’Italia and …

It is a vast empty space of concrete. It’s 130,000 square feet. Two overpriced cafes with outdoor seating sit on opposite sides. The majestic Town Hall at one end can’t make up for the massive, charmless government buildings and stuffy Grand Hotel Duchi D’Aosta that line the rest of the square. I kept thinking Trieste was still part of Yugoslavia and Slobodan Milosevic was going to march in his murderous army at any moment. It’s like waiting for years to see this beautiful model and when you finally arrive, she’s 30 pounds overweight, her hair’s in curlers and she’s wearing a house coat. I had the same reaction I did when I first tried truffles.

Trieste’s infamous wind, the Bora, enveloped the city in a cold, gray cloak. With cold air coming down the hills that surround the city and dumping into the Adriatic, Trieste is constantly windy. I often found my green rain jacket flying horizontal to the sidewalks. What Trieste has going for it is fantastic vistas, better wine and a fascinating history.


The views started with my AirBnB. The fourth-floor apartment sits in a building high up a hill about two kilometers from the city center. From the spacious balcony, I could see a series of apartment houses strung down the hill from just above me to the port below. I took a tour of Trieste’s other crown jewel: its 15th century castle, Castello di San Giusto. From the ramparts that wrap around the top of the long wall, the city center is a blanket of neat red-tiled roofs fronted by the forested Parco della Rimembranza. Ships, tankers and pleasure craft bobbed up and down in the frigid sea. On second look, Trieste is kind of nice. However, the piazza is best seen at night, under soft lights, filled with revelers and not the scaffolding as I saw being constructed for an evening concert.

Also luring me to Trieste was a wine tradition that captured me in my early drinking years in the 1990s. Friuli produces one of the best Pinot Grigios in the world. At its crispness, few wines go better with fish or chicken and Trieste’s taste held all the way to my stomach. But the great thing about Italy is you only have to wait a few hours to discover a new wine. In a seafood deli called SaluMare (It’s slogan: “IN COD WE TRUST”), I sat outside on the pedestrian mall of Via Cavana with bruschetta made from baccala’ mantecato (salt-cod puree) and smoked salmon. Washed down with two glasses of Bracco Friulano, a nice white wine made a cork’s throw from Trieste and suddenly, the wind didn’t seem quite as strong.

OK, maybe there’s a reason countries fought to the death over this spur on the Adriatic. The list of people who controlled this area started with the Romans, continued with the Lombards, Venetians and Austrians. Being handled like a political hot potato became too much for many Triestinos and many split for Australia and Argentina. 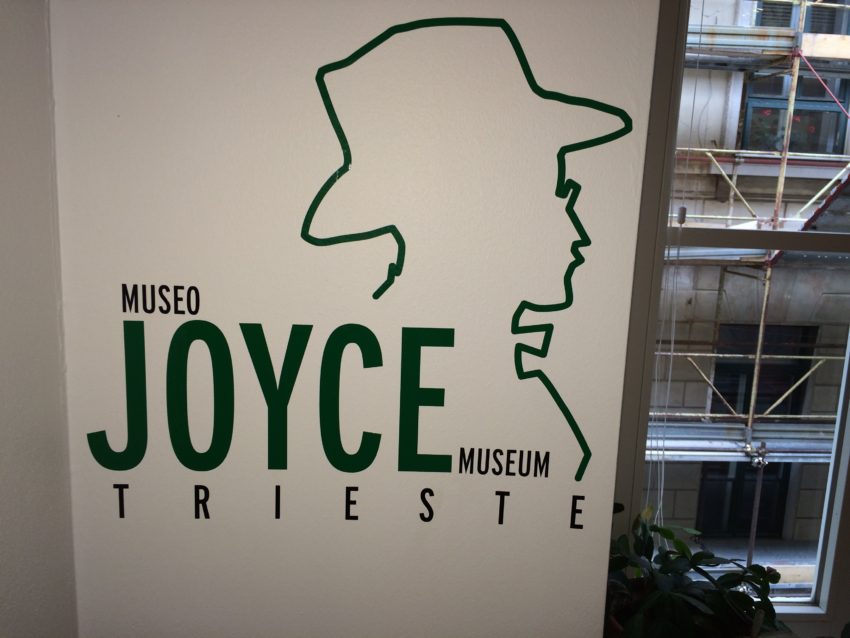 One migrated here and could write a book about what he loved about Trieste. I wish I’d read that in my college Irish Lit class instead of James Joyce’s indecipherable “Ulysses” and “Finnegan’s Wake,” which even baffled some Gaelic scholars. I remember reading the first page and seeing the word “bababadalgharaghtakamminarronnkonnbronntonnerronntuonnthnntrovarrhounawnskawntoohoohoordenenthurnuk!” I immediately bought the Cliff Notes and checked into student counseling. I also swore, as a perpetually hung over college junior, I’d some day piss on Joyce’s grave.

So here I am in Trieste where I almost could. A museum celebrates Joyce along with his good Triestino friend, Italo Svevo. In 1904, at the age of 21, Joyce moved here penniless from Dublin to expand his writing career. He stayed altogether 16 years. In between, he lived in 13 different apartments, taught English, weathered World War I, overcame eye problems that needed a dozen surgeries and wrote his other hits, “Dubliners” and “Portrait of an Artist,” two books I promise I will never read. Joyce never let being broke stand in the way of two passions: brothels and the theater. Stuck in the cheap seats, he once wrote of venerable Teatro Verdi, his seats were always next to “sodden walls ooze a steamy damp” and smelled of “sour reek of armpits.”

I couldn’t piss on his grave. It’s in Zurich. He left Trieste in 1920 for Paris where he spent 20 years. He died in 1941 in Zurich after falling into a coma following surgery for a perforated ulcer. However, there is a life-size statue of him on a bridge over a canal in Trieste. I didn’t bother. Slovenia beckoned. The piazza did not.