SABAUDIA, Italy — On a planet that is two-thirds covered by water, the Tyrrhenian Sea is so far down the list of majestic seas that you’d need Jacques Cousteau to find it. It can’t even hold claim as the most famous sea in a country. On Italy’s east coast is the Adriatic Sea. The Adriatic sparks images of Greeks and goddesses, yachts and islands, myths and legends. To the south is the Mediterranean. It’s mighty in its own right. It borders three continents. Its history dates to the time of the Phoenicians when Rome was more than 1,000 years from its first emperor.

Meanwhile, the Tyrrhenian Sea can’t even be spelled. No, that’s not a typo. It really does have two Rs, one of which should stand for “redundant.” It reads like someone had a key get stuck. Its anonymity doesn’t make much sense, really. It is huge. It stretches from Tuscany all the way along the northern coast of Sicily. Like the Adriatic it has islands. Ever hear of Sardinia? Like the Mediterranean (which also has two R’s but the second one just looks like it belongs), it has history. Monte Circeo, overlooking the beach, is believed to be where the Sirens’ sweet music lured Odysseus’ sailors to their watery deaths in “The Iliad.”


And, like them all, the Tyrrhenian has beaches. That is why this sea is so important to 4 million Romans. It is why it is so important to me. Now. Temperatures here in Rome remain in the mid-90s with 50-percent humidity and the only escape is your shower. The Tiber River is so filthy, I read where a man swam in the river and died from an ear infection produced from — get this — rat urine.

So this month, like a turtle to his nesting ground, I have made numerous trips to the Tyrrhenian Sea’s beaches near Rome. In my world travels, beaches are huge. They symbolize relaxation like thrones symbolize wealth. What comes to mind when you think of words like solitude, languish, bliss, sun, warmth? A beach comes to mind, right?

I have kept a list of my top five beaches and have memorized them better than my family’s birthdays. Feel free to clip and save and pull out when you get the courage to venture away from the safe American confines of Hawaii:

1. Mahe, Seychelles Islands. A perfect half-moon bay filled with water the color of a robin’s egg and lined with leaf to leaf palm trees. I asked a local in a bar why the beach was empty. He said, “Because it’s awful.” Awful? I told him it’s the best beach I’d ever seen. “You should see the outer islands,” he said.

2. Seven-Mile Beach, Palawan, Philippines. Conde Nast magazine picked El Nido, just north of Seven-Mile Beach, as its No.1 beach in the world for 2014. Sorry, Conde. Seven-Mile tops it. It is seven miles long of white sugar sand without a rock on it or in the water.

3. Englishman’s Bay, Tobago. The smaller brother in Trinidad & Tobago, Tobago is lined with individual beaches cut off from each other by outcroppings and jetties. I reached Englishman’s by driving through 100 feet of mud and parking under a clearing of palm trees. The only structure on the 100 yards of curved beach was a small snack shack.

4. Beachcomber Island, Fiji. It’s only about a half mile around the island lined by white sand and encircling thick foliage with a few guesthouses. It’s right out of a Far Side cartoon. All there is to do is lie on the beach, drink and dance.


5. Goyambokka, Sri Lanka. I visited in March and it puts the capital “E” in Exotic. On the southern tip of the island, it’s a stretch of fine white sand, lined with palm trees and a water that is as warm as a birdbath.

No beach on the Tyrrhennian will make this list.

However, it’s what we’ve got. Romans joke about the one neighborhood that is on the sea, Ostia. People don’t realize that Rome’s city center is only 25 miles from the Tyrrhenian and Ostia, which dropped its independence to be part of Rome in 1976, technically means Rome is on the sea. But people joke about Ostia for a reason. The sea at Ostia, just south of the airport, is the color of a rusted battleship. It’s kind of gray-green with the visibility of minestrone. It doesn’t seem as dirty as some say. You don’t see bubbles or beer bottles floating on the surface as I’ve seen in Asia. But it doesn’t inspire images of floating under a brilliant sun or Campari on ice under a little beach umbrella. The beach is lined chock-a-block with restaurants and bars and changing stations. On weekends when Romans flee to the nearest beach, Ostia looks like the Jersey Shore. But the sand has no rocks, the water temperature is good and it’s a 35-minute train ride from Rome. It works. But that’s it. It’s like walking into an artisanal brew pub and ordering a Schlitz. 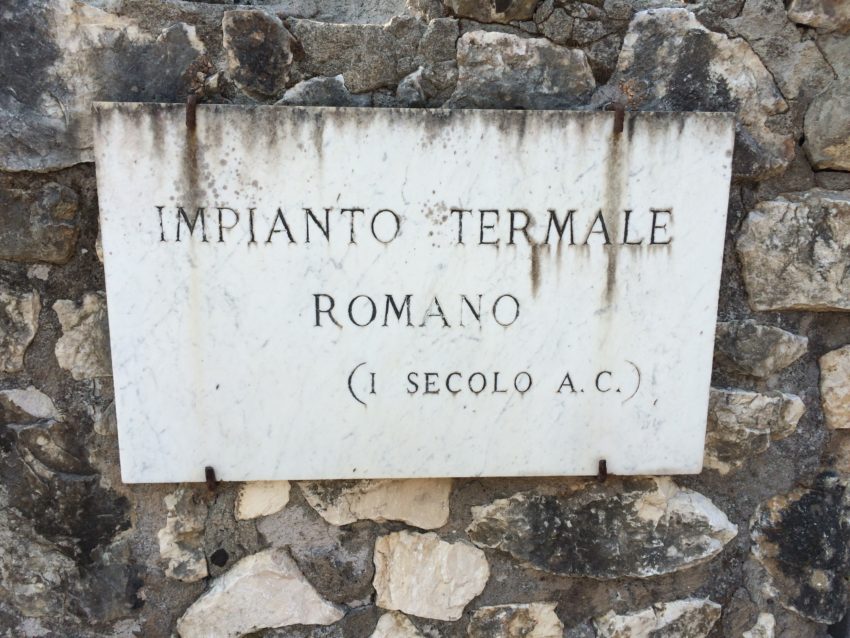 The farther you get from Rome the nicer the beaches. Fregene, north of Ostia about 15 miles, is harder to reach by public transport. Thus, it’s less crowded. The water is more green than gray. But the long line of food establishments gives it a county fair feel.

Maccarese, just north of Fregene, has comfy lanais chairs for the reasonable price of 10 euros and water cleaner and even more void of rocks.

Twice I have been to Santa Severa, a black sand beach 35 miles north of Rome just south of the port city of Civitavecchia. Santa Severa is vastly underrated, underpopulated and underpublicized. Good. I will return. Despite the lack of palm trees and any amenities, it is the one beach that makes you feel away from it all. But you’re reminded you’re in Rome by the 9th century castle that juts out into the sea and the Etruscan temple you walk past to reach the beach.


This week I went farther afield. About 60 miles south of Rome, past the pope’s residence of Castel Gandolfo and apartment house ghetto that is Latina, lies a town where the Tyrrhenian mirrors the Caribbean. It’s where the Tyrrhenian is so clear you see fish swirling around your ankles as you wade endlessly into the gentle blue-green surf. It’s where the sand is the color of gold dust, where the sun is so huge as it sets on the horizon, you feel you can swim to the end of the earth.


The town of Sabaudia was developed in the 1930s by Benito Mussolini and his band of beach fascists. In one of the positives Mussolini did while in power, he drained the malaria-infested marshland south of Rome and developed industry and communities. One of those was Sabaudia. While Mussolini’s little achievement was overshadowed somewhat by befriending Adolf Hitler, Sabaudia today is one of the nicest beach towns in Italy. Many of the rich and famous come to Sabaudia to work on their tans and drink cool white wine in the shade. Francesco Totti, A.S. Roma’s soccer hero, owns a house here and is often seen playing beach soccer with random children.

I walked along the beach that is long and wide with nary a rock in sight. A huge rock outcropping at one end reminded me of Diamond Head at the end of Waikiki Beach. However, Waikiki doesn’t have the remains of an ancient villa belonging to Emperor Domitian (81-96 AD). I eschewed the larcenously priced lanais chairs to lay on my Sri Lankan sarong and read my terrific Roland Merullo book, “Breakfast With Buddha.”

I knew it would be crowded when I picked up the bus in Rome. Three buses left for Sabaudia and points south at 8:45 a.m. All three were packed. I arrived in early afternoon and by 2 p.m., nearly every lanais chair was rented. It no longer looked like the Jersey Shore. Let’s be honest. It looked like Italy in July. Italy in July, as I wrote before, sucks. Children screamed. Teen-agers preened. The elderly baked under umbrellas. They didn’t move except to move their seat with the sun.

Let me amend something I’ve written often in this blog. After several trips to Rome’s beaches, I conclude that not all Romans are beautiful. The collection of fat, rolly pot bellies and cottage-cheesed legs could pass on bodies on any lake in Nebraska. I wondered if some of these people actually undressed in front of their spouses.

However, the sea is never crowded. Shedding temperatures in the mid-90s and 50-percent humidity, I peeled myself off my sarong and walked gingerly over the coal-hot sand into the sea. The water temperature is in the high 70s, the perfect temperature to wipe off the sweat without putting your heart into temporary spasms. Even in the sandy depths I could see the ocean floor. Suddenly, I wondered where I put my scuba diving C-card.


The next day I went farther south to Sperlonga, just north of Campania, the region where Naples and the Amalfi Coast tend anchor. Sperlonga was developed well before Mussolini. In fact, Emperor Tiberius (14-37 AD) had a villa built overlooking the beach. The villa’s remains can be still seen at one end.


If Tiberius saw all the lanais chairs and umbrellas covering his beach today, this beach would be the site of mass beheadings. From some spots on the road above, sand can barely be seen. However, the Tyrrhenian is even bluer and cleaner and warmer here. My swims were longer. My mind was clearer. For 10-15-minute stretches, the humidity and the crowded buses and the packaged tourists were on another planet as I laid on my back on the cool, clean Tyrrhenian Sea.

Italy may not have the beaches, but the beach food may rival anywhere in the world. At L’Ancora, in the nearby town of Formia, I sat on the patio with a distant view of the sea and had its famed seafood pasta: spaghetti packed with a generous tossing of oysters, clams, mussels, crab, hermit crabs, octopus, calamari, olives and basil. Topped with an appetizer of fresh cantaloupe and lean prosciutto and an ice cold beer, few beaches in the Caribbean, Asia or South Pacific could top it.

But I managed to. On my second night I ventured down to Saporetti, a white-table clothed restaurant with a lowbrow bar and tables facing the sea. I had two glasses of the house white, a Chardonnay made right here in Sabaudia, and watched the blood red sun set on the sea. It was 8:30 p.m. Humidity in Italy drops at night. I no longer felt sweaty. My wine tasted like champagne after a day in the desert. I found myself smiling for no apparently reason.


No, Rome’s beaches won’t make Islands magazine. I won’t enlarge any of my photos for my wall. But for Rome, a 3,000-year-old city that in July seems to melt like pistachio gelato in the sun, these beaches make me feel like an emperor.