FIUMICINO, Italy — I love the parlor game: Who would you like to be at any point in history? Mine’s easy.

I would be part of the aristocracy during the Roman Empire.

What would your life be like? Let’s see. You go to your private thermal bath and sit in an outdoor Jacuzzi set at 96 degrees (Fahrenheit). Then you go into a sauna where a young woman fans the 140-degree air to open your pores even more. You then step into a cold shower and sit in a Turkish bath at 105 degrees. Go sit in another Jacuzzi — this one indoors — then walk through a shallow pool of refreshing cold water before showering under a warm waterfall.

You bathe yourself in perfumes and go have a lavish meal with elegant finery and soft music filling the air.

Then you go have fantastic sex in an overstuffed bed.

I don’t know if the aging senators during Ancient Rome had all those trappings. However, I did last weekend.

For an early Valentine’s Day present, I took Marina to QC Termeroma. It’s one of a couple dozen thermal spas and spa hotels around Rome, which has continued this luxurious tradition after 2,000 years. QC Termeroma is in Fiumicino, the town only known outside Rome for the city’s international airport. It’s also known by locals for the region’s best collection of seafood restaurants and this spa right out of the history books.

QC Termeroma began in 2014 and is one of nine QC wellness centers around Italy with another in Chamonix, France. The number of spas around Rome has been reduced from the 952 that were here in 354 AD but the popularity to the Roman people remains the same.

Just as they gave the world warfare, representative democracy and stadium architecture, the Ancient Romans also gave us spas. In fact, the word “spa” stands for

Latin for “Health through water.”

Many hot springs in Lazio

Rome’s Lazio region has numerous natural hot springs. I’ve been to them in Viterbo, where Michelangelo once bathed. I also blogged about my experience at AcquaMadre, an indoor spa in the Jewish Ghetto that’s nearly a replica of the kind of bath houses where Romans bathed during their Empire days.

QC Termeroma, however, is a pleasure palace. It is not built above natural hot springs. It is entirely man made and although it looks designed for the aristocracy, it’s priced and designed for the Roman masses of today. About 150,000 visit QC Termeroma every year, nearly half from Lazio and nearly all the spa visitors are local. Most leave work and drive the 20 miles from Rome to this spa on Via Portuense, built in the 1st century AD to connect Rome with the Port of Rome where the mouth of the Tiber connects with the Tyrrhenian Sea.

The complex consists of three buildings built in the 1920s set amongst 10,000 acres of greenery, a near forest of oak, pine and eucalyptus trees. We didn’t even notice the jets flying overhead to the airport only two miles away.

We walked into the spacious lobby where one table is covered with different QC brand cosmetics. Comfy chairs fill the room. The floor is white travertine stone — “

Roman,” Marina said — and decorations of marble from around the world.

This was our second trip to QC but our first overnight stay. The room is spacious with a king-size bed and mini bar with three kinds of bottled water and snacks for every type of munchie.

We arrived late Friday afternoon. Our first visit came on a Saturday night when the entire spa was as packed as the water park in Dubai. People had to nearly move over to make room for us in the giant Jacuzzis. On Friday afternoon, we were two of just a handful of people.

We changed into the terrycloth bathrobes laid out on the bed and didn’t feel a bit conspicuous walking through the lobby. I’ve been to spa hotels before in Hungary, Czech Republic and Lithuania. Everyone walks around in bathrobes as if the hotel is one giant pajama party.

We took towels and plastic flip flops at the spa’s front desk then went downstairs and through a long corridor — past the cascading waterfall showers, Jacuzzis on one side and saunas and steam baths on the other. We went outside and climbed a short flight of stairs in the winter chill of a mid-40s Roman night.

Three big pools the size of small backyard swimming pools were nearly covered in rising steam. We hung our bathrobes on a rack and joined two other couples in the Jacuzzi, its 97-degree water soothing our bodies shaking from the few seconds in the cold.

The stars weren’t out, but the crowds weren’t, either. It was just six of us in various coupling positions whispering in our partner’s ear and pushing the whirlpool’s reset button every 10 minutes or so. It was quiet, as if everyone had a secret.

Many saunas and baths

We finally got the courage to leave the soothing whirlpool, don our bathrobes and go inside. We headed to the sauna where a young woman (not bikini clad, so calm down, guys) modestly clothed waved a towel at half a dozen of us sitting on the wooden steps. The towel sent steaming air into our faces and bodies like 150-degree blow driers.

We lasted about 10 minutes and poured ourselves outside. As soon as we walked into a short, curving hallway, a cold shower sprayed over us. The theory behind spas is alternating hot and cold helps open the pores, a theme that repeats itself throughout the spa.

On the long main corridor stands two cascading waterfalls where we stood with our hands behind our backs as the water fell thick and warm and oh, so soothing on our heads and shoulders. It’s not like sitting under a waterfall in Southeast Asia but for being two miles from an international airport it was ultimate bliss.

We climbed a few steps to find small, indoor Jacuzzis. It was approaching 7 p.m. and more people were beginning to appear. Nearly everyone was Italian. I don’t remember hearing another language all night. The people were all shapes and ages, from an obese man straight out of an American obesity documentary to shapely, 20ish Italian women and their muscled, well-coiffed Italian boyfriends. It was a friendly group, all polite and accommodating. 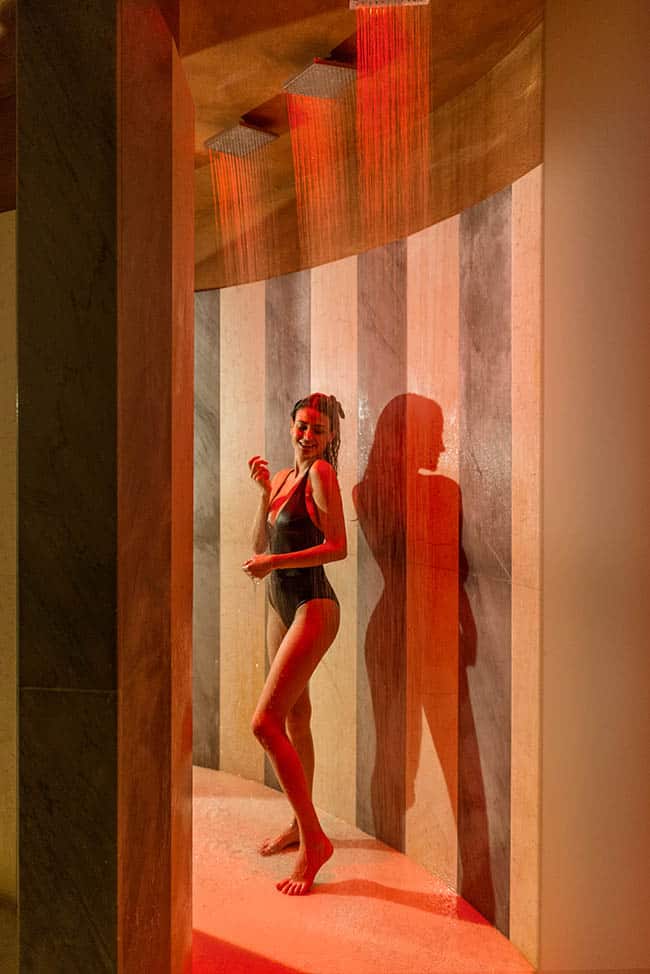 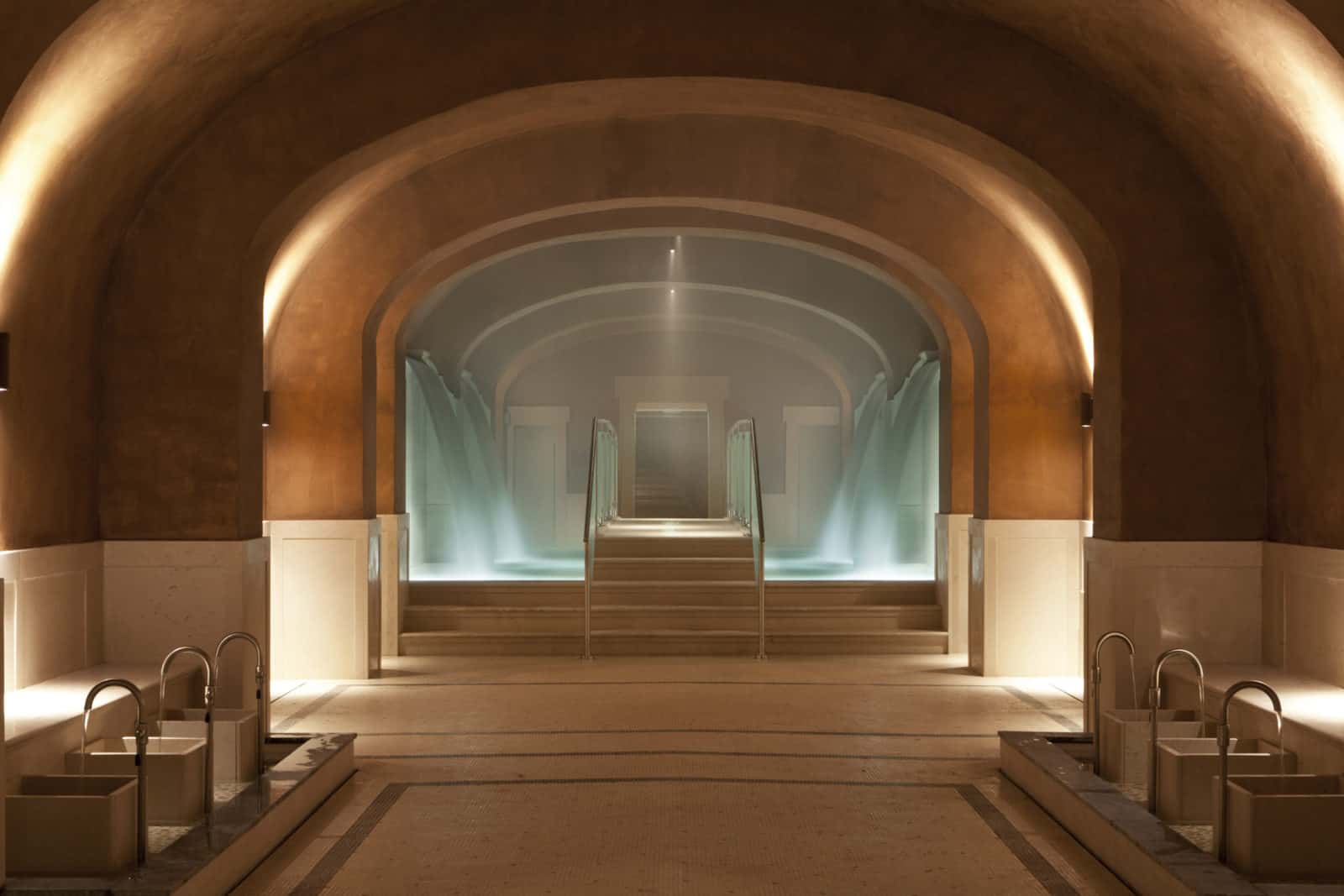 It’s hard to get in a pissy mood in a spa.

We then walked into a little wading pool, a narrow, three-sided path filled with cold water. We gingerly walked through knee deep and read the sign about the importance of opening the pores. At that point, my pores were open enough to fit grapefruits.

We finished our 90-minute stay in a Turkish bath, relaxing and sweating and not moving in 104-degree heat. As I sat there with my eyes closed and feeling sweat drip down my body, I kept wondering: How could the Roman senate experience this then declare war on Persia?

All I wanted was a good meal.

After a shower in the luxurious locker room, complete with exotic oils and shampoos and liquid soaps, we changed clothes in our room and walked across the complex’s large courtyard to QC’s restaurant. Domus Iris (Rainbow House in Latin) has an arched entrance with 19th century lanterns on the floor as you enter the two double glass doors. Waiters in suits and ties hovered over our table with white tablecloths and rolled napkins held by little leather belts. On each table stood a round, lit cylinder, an ingenious alternative to a white candle and no less romantic.

I was wary of Domus Iris. Most restaurants at theme hotels are like quiche: heavy on looks and light on flavor. Domus Iris is not. They started us off with a complimentary gourmet biscuit topped with parmesan, wasabi mayonnaise and olive oil from Itri, a lovely little town near the sea south of here.

Then came the antipasto:

a big chunk of rabbit wrapped in bacon and sprinkled with parmesan cheese. My main course —

were fantastic lean cuts of beef mixed with sweet potatoes and broccoli and a tangy mayonnaise mix on the side. All washed down with a couple glasses of local red wine from the nearby Alban Hills, it was a meal worthy of Roman royalty.

The next morning topped it all. QC Termaroma has a massive breakfast buffet, everything from toasted waffles to cheeses, to a tower of pastries. Fat and happy, we put our bathrobes back on and headed back to the outdoor Jacuzzis. At 9 a.m., we had the whole place to ourselves. The sun was out. The air was crisp. The water was steaming.

The whole affair isn’t cheap but not overpriced. The room and spa for two was 216 euros and the meal was about 90. It wasn’t just a nice Valentine gift to my girlfriend, but what price would you pay to enter a time machine and sent back to Ancient Rome?

The difference is, as we checked out I had no desire to invade Persia.