Venice is most romantic city on earth but will the last Venetian to leave please hang up the gondolas?


VENICE, Italy — What’s your definition of romance? Writers have tried describing it ever since Cicero chronicled Mark Antony’s ill-fated courtship of Cleopatra. Is it a sunset on a beach? A candle on a table? A line in a movie? I know what my definition is for romance.

Romance is an air so quiet you can hear water lap against a boat dock. A bird’s song is louder than anyone’s voice. You can hear wine glasses clink across a road. It’s when the modern world fades into the distance and you’re enveloped by another era, before machines, before pollution, before stress. Love is more important than money, and love is everywhere you look.

That’s why I come to Venice, the most romantic city in the world.


It’s a cliche, really. But some cliches are true. Imagine a city with 170,000 people without cars, where the only mode of transportation is boats. The only motors one hears are the soothing hum of outboards. I’ve been here three times and each time it’s like walking through a water color painting. Everything is so still. The only movement is me and the occasional modest motorboat or graceful gondola slowly plying a canal. Even the lovers’ strolls are slow. It’s not just because the Millennium-old cobblestone streets are nearly impossible to negotiate in Italian footwear.

In a quiet city, I am in one of the quietest areas in Venice. My AirBnB apartment is in Giudecca, the southern most of the 100-plus islands that make up the city. If Venice is shaped like a fish, Giudecca is the giant fish hook dangling under its mouth, the mouth of the Grand Canal.

The apartment has a big-time, postcard-perfect panoramic view of Venice, glowing like a series of sparkling jewels across the wide Giudecca Canal. I’m sharing the apartment with the owner, Julia, a 6-foot, curly-haired American from Berkeley, Calif., and her 3-year-old daughter, Cornelia. Except for Cornelia acting like a 3-year-old every morning and Julia acting like a harried single, working mother, the setup is ideal. Below the second-story apartment is Trattoria Cacciatore where Ricardo, my Cuban waiter, always hustles when fetching my daily afternoon Pinot Grigio from Veneto, Venice’s wine-rich region. A few storefronts down is Caffe La Palanca, home of Italy’s best chocolate brioche, a fat, fluffy pastry filled with warm, creamy chocolate. The owner, Andrea, is always smiling, as if I’m the first tourist he has ever served.

Walk down one of the narrow alleys that lead to the blockish apartment complexes and it’s even quieter. I see the occasional children kicking a soccer ball against a building, careful with their accuracy so as not to boot the ball into the drink. Women carry big plastic bags of groceries. But there’s another reason it is so quiet. There’s another reason Venice is even quieter than I’ve ever seen it. It’s not the amphibious nature of the populace.

It’s because Venice is dying.

In 1860, George Eliot wrote, “We were out one night on the Lagoon when the sun was setting, and the wide waters were flushed with the reddened light. I should have liked it to last for hours: It is the sort of scene in which I could most readily forget my own existence, and feel melted into the general life.”


It’s 150 years later, and Eliot could have written about his gondolier frantically trying to paddle out of the way of an oil tanker.

In the last 45 years, more than 120,000 people have left town. Less than 60,000 people live here today. Many have fled to Mestre, the last town on the mainland before the train crosses the canal to Venice. The soccer team, once a regular in Serie A and having the distinction of playing in Stadio Piuluigi Penzo, the only stadium in the world where fans — and players — must take a boat to reach, now play in charmless 4,000-seat Stadio Mecchia in Portogruaro, 35 miles to the northeast. Venice’s highly popular Italian League basketball team plays in Mestre. They are Venezia in name only. Even the newspaper, Il Gazzettino, moved out. It’s like Venice has gone from a thriving, historical city to a water park. Riding the vaporetto around the Grand Canal I sometimes feel like I’m 8 years old again on the little boat in Disneyland’s “It’s a Small World” ride.


What happened? How did one of the world’s most famous cities and arguably its most romantic become so deserted?

Are those gondolas or life rafts?

It’s a tale of mismanagement, greed and basic geography. Venice is sinking. In 1952, the city dug a 50-foot canal to attract oil tankers and commerce. Financially, it worked. Twenty-five tons of freight a year were shipped on the lagoon. But half of it was oil. A chemical and petrochemical plant poured tons of poisons into the lagoon, and waves from the larger ships destroyed the sandbar. More than a 1 million cubic meters of soil washed away. Then, on Nov. 11, 1995, five tons of fuel spilled into the lagoon and the oil spill lasted four days. 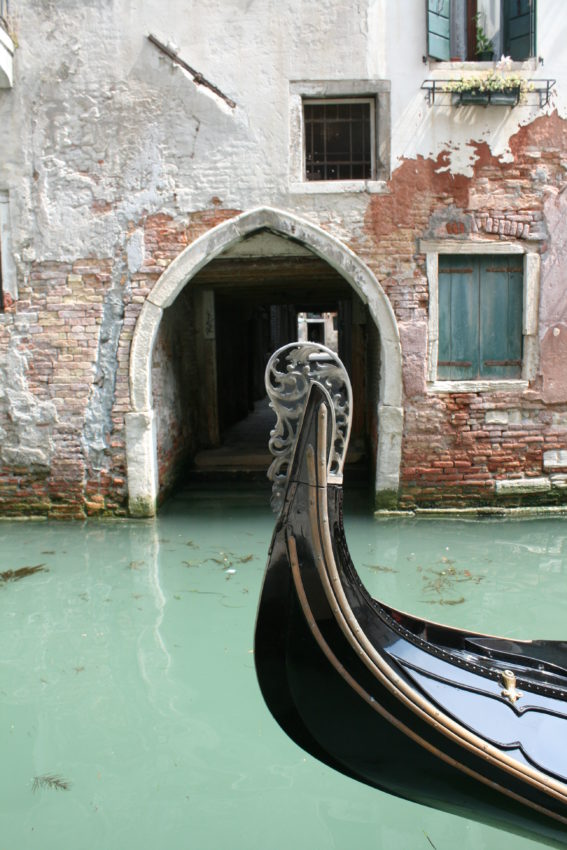 After 1,300 years or romance, Venice had turned into a backed-up sewer.

However, the fleeing Venetians left the streets even less crowded. And no city in Italy is easier to get away from the maddening crowds than Venice. The Grand Canal is lined with so many sidewalk restaurants and cafes you think it’s the Henley Regatta. That includes constantly jammed Piazza San Marco, home to the onion-domed basilica and enough pigeons to scare statues into running to Mestre, too. It sits above the mouth of the Grand Canal like a giant golf ball caught in the fish’s throat.

However, if I walk just two streets over from just about anywhere on the Grand Canal, I am in near isolation. I remember in 1978 spending an hour with a weathered fisherman repairing his nets. We sat and drink his cold white wine from a gallon bottle without a label and talked with our hands. Back then, few countries in the world had fewer English speakers than Italy. On this recent trip, I could still stroll the quiet back alleys without hearing a single English word spoken or see one Yankees cap.


One area I’ve always loved and have found overlooked is the Jewish Ghetto. It’s near the train station yet practically hidden by the immense shadow cast by the landmark Rialto Bridge. The bridge, built in 1591 for today’s equivalent of 19 million euros, still attracts more hoards than Golden Gate Bridge even though it’s under renovation and the city put up a faux front that looks just like the real bridge. But the Jewish Ghetto has numerous local restaurants, mostly serving kosher food, and an air of history that makes you hungry to explore. I did that for an afternoon with a guided tour of three of the five remaining synagogues. A curvy, tanned Jewish Venetian with blonde curls cascading down to her shoulders and tight blue jeans took 10 of us to three of the five remaining synagogues.

I had no idea the word “ghetto” comes from the Venetian word “getto,” meaning foundry. Venice had a foundry in this neighborhood from the 16th to 18th century. Jewish lenders, doctors and clothing merchants were allowed to work during the day but at night had to remain in the ghetto, which at the time was gated.

The neighborhood grew in the 16th century when Spanish Jews fled the Inquisition. Even today, the four and five-story apartment houses built to accommodate the immigrants remain some of the tallest buildings in town. By the 17th century, more than 5,000 Jews lived in Venice. The Jews gained citizen status when Napoleon lifted restrictions in 1797 but then Mussolini got control and laid down the hammer. By World War II, the numbers had dropped to 1,000. In 1943, most of the neighborhood’s Jews were hauled off to concentration camps and executed. Today, Venice’s Jewish population numbers only about 400. They are scattered around the city but parents still bring their kids to the Ghetto to play. In the main square of Ghetto Nuovo (New Ghetto), a barbed wire fence covers one wall. It serves no purpose other than as a reminder.

The tour is terrific for religion or history buffs. Only two synagogues are used today: one in the summer and the one with heat in the winter. The oldest is the Tadesco School, or German synagogue. The Germans built it here in 1528 and it is filled with beautiful baroque trim and marmoline walls. The Canton School was built by the French in 1531 and is used today for weddings by foreign Jews. Guests throw bread crumbs out of the stained-wood windows to rid the couple of their sins. The Satartic School, built from 1575-80 was for the rich merchants and is still in regular use. It employed the best artists and Christian architects. The synagogue is held up by marble poles and columns. The 17th century pulpit is made by hand-carved cherry wood. The whole place feels like a palace.

Curiously, it is only open Monday, Thursday and Sunday mornings.

“Italians may be mad for football but not religion,” the guide said. No truer statement have I heard about Italy.


Even though Venice is dying on the vine, it’s still big enough to discover new neighborhoods. Right across the canal from Giudecca is the neighborhood of Dorsoduro. In Italian, that means “strong spine.” On the fish, it represents part of the lower jaw. It’s a small, square neighborhood crisscrossed and slashed by three narrow canals and lined with local enotecas and cafes.

Venice has a long-standing drinking tradition which I happily explored in I Schiavi (The Slaves). It’s a small bar with a horde of people standing outside, resting bright orange cocktails and sparkling glasses of white wine on wooden rails lining the canal. The orange cocktail is a Spritz, made from Prosecco (Italian champagne), Aperol and soda water. Its birthplace is Veneto. It tastes like a bitter Kool-Aid. Making up for it, I admit it I look good with a marmalade-colored cocktail in my hand with the sun setting on a canal behind me.

The wines in Venice are spectacular. The Veneto region is famous for its crispy Pinot Grigios and, my new favorite, Soave, buttery like Chardonnay but with a much softer after taste.

Venice’s version of an aperitivo is a cicchetti. They are little, delicately prepared finger foods that are just filling enough for a cheap meal and healthy enough to not feel you’ve punted your Mediterranean diet. For just 1.50 euro each, I had smoked herring, gorgonzola and pear in balsamic vinegar and prosciutto and crudo, all on small squares of fresh bread.

The Venetians serving up the wine, the bread, the underrated pistachio gelato and terrific seafood pasta are as nice as anyone I’ve met in Italy. It can’t be easy. Their friends are fleeing. Their economy is crumbling. Their city is sinking. Yet their spirit made me think that living in the most romantic city in the world will never wear off for them.

Like the Venetian Empire that preceded them, this is one city worth defending.