Venice rowing lesson gives me all new respect for gondoliers


VENICE, Italy — Job opportunities in Italy are limited for American expats. Without a European Union passport or a government posting, you’re pretty much limited to working in the back of kitchens where you can escape before storming immigration officials can reach you. My idea of slowing my checking account’s outflow is not selling knock-off Gucci bags near the Vatican. Besides, I doubt I’d blend in well with the Nigerians.

But what if the gates were open for us? What would be the ideal job in Italy? Fashion photographer? No. Models are too skinny and bitchy. Sommelier? Nope. I don’t drink on the job. How about this:

What a great way to make a living. You spend your time plying Venice’s narrow canals with people in love. As an old-fashioned romantic and a sucker for romantic scenery, I’d be like Michelangelo signing up to paint houses. Besides, I look good in horizontal stripes.

So when I got word that Venice offers rowing lessons, I signed up immediately. Hey, maybe I could moonlight as Venice’s token American. Instead of crooning to couples, “O Sole Mio,” I could sing “In a Gadda da Vida.” OK, Iron Butterfly is a bad example. But give me a chance. I’ve helped friends’ relationships for years. A gondola pilot is the ultimate wingman.

I took a vaporetto, Venice’s conveniently large public transport boats, to the north-end neighborhood of Cannaregio. Disembarking, I zigzagged my way along narrow canals where fishermen zipped around in small motorboats and men in business suits walked to work. Sans cars, it was so quiet I could hear the old men gossiping and complaining in the little bars along the water.

I reached the Sacca della Misericordia boatyard which is basically a large port for real small boats. Rowboats of various lengths and shapes filled the berths. It looked like an Olympic training center for rowing.

I saw no real gondola. The sleek black boats as narrow as a barracuda were nowhere to be seen.


I met one of the two chiefs of Row Venice, Nancy McElroy, who left her home in Bowling Green, Ky., more than a decade ago because, she said, “I got tired of living my life in a car.” She loved the idea of a city where the lone mode of transport is a boat, where the only sounds you hear are the occasional hum of a small outboard motor or the gentle lapping of water. She introduced me to my instructor, Julia. In her 20s, Julia is the epitome of young Italian athletic beauty. Tall and lithe with long blonde hair and a seemingly permanent smile, Julia competes in local rowing competitions, a tradition that dates back to the height of the Venetian Empire in the 15th century.

I’ve been disappointed during my travels before. Guam immediately comes to mind. So does eating mutton for 17 straight days in Mongolia. But I don’t quite recall a disappointment as when I saw the boat I’d row. It was a big, flat brown rowboat that looked as sleek as Luciano Pavorotti. Where was the sharp, black gondola, the kind with the trademark regal bow and cushioned seats?

Julia explained that the true gondolas, the ones that have transported lovers and dignitaries in Venice for nearly 1,000 years, only have room for one rower. It’s 35 feet long and only four feet wide. It has room for two lovers but no instructor. Also, it is designed to only turn right. It’s exactly the opposite of a race car. In fact, one side is 10 inches longer than the other. Turning left is nearly impossible and it’s unsteady enough that any beginner will likely land in the drink before he passes his first pigeon.

In its place is what is called a batea a coa de gambero. I didn’t know if I was riding a boat or an Amazonian snake. Actually, “gambero” is Italian for prawn whose tail is what this boat’s stern resembles. Julia said the batea is more stable. “You have a better chance of going in the water getting in and out of the boat,” she told me. It is also roomier. Julia got atop the stern and helped steer while I slaved away up front.

In actuality, the batea is older than the gondola. They were used for transportation well before they developed the gondola for VIPs with agendas and lovers with hormones. There are only six bateas left in the world and Row Venice has two of them.

“This is the grandmother of the gondola.”

But it’s also like showing up at Indy and expecting a Ferrari and getting a Honda Civic.

It’s my fault. I didn’t read Row Venice’s website very carefully. They advertise for a “Venice Rowing Lesson.” It mentions nothing about singing “O Sole Mio.”

Crestfallen but still eager to show my worth, I shoved off the side of the canal, grabbed the ore — and proceeded to make a complete arse of myself. Rowing a large flat, wooden rowboat while standing up is like pushing a wheelbarrow while standing on a tightrope.


Julia was a very good instructor. She spoke impeccable English and had the patience of a shrink in a handicap ward. She had me place my feet, while I faced forward, on the left side of the boat. The oar, which is loosely attached to a semicircle of a holder, is the approximate weight of an NBA power forward. I had to lean over, grab the oar with one hand near the top and the other about halfway down, pull it out of the water and pull the handle in toward my legs, put the oar back in the water, then, with my back in the shape, appropriately, of a question mark, push forward. I’ve rowed kayaks and canoes and they are so easy they become almost part of your body. Rowing a batea is like pushing a Bernini sculpture uphill. You don’t go very fast. I can see why Julia said these are never used for racing.

The rowing motion is extremely awkward. Half the time, the row popped out of its loose mooring and I nearly clocked Julia. When I did manage to keep it in the water I couldn’t get enough purchase standing in the boat.

Somehow we made progress. We floated down the narrow canal at a rate finally commiserate with my effort. I kept looking behind me to see if Julia was quietly paddling furiously or snuck an outboard motor on the back. 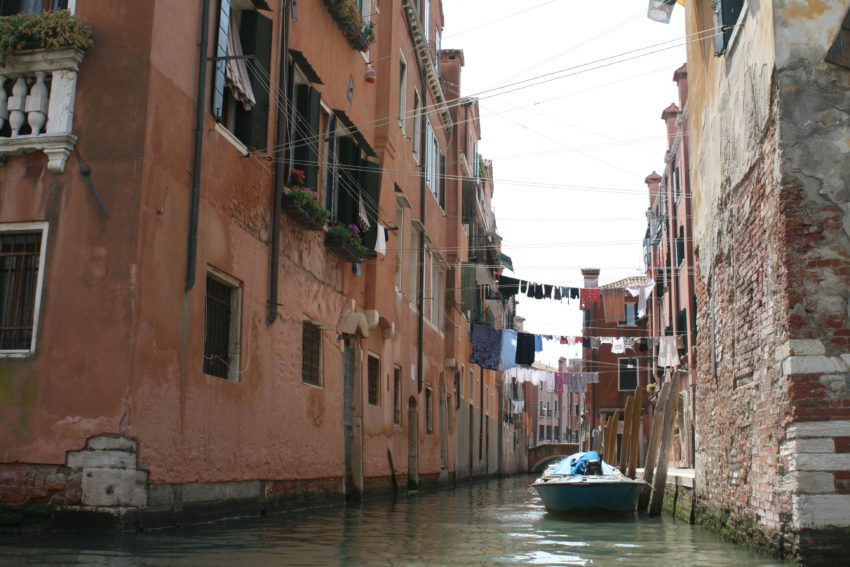 The scenery would’ve been spectacular if I wasn’t concentrating on the progression of a half dozen moves to make the oar work while my back reminded me to find a good chiropractor in Rome. As I stared at the oar, out of the corner of my eye I could see a rainbow of colored apartments. Every first-floor flat had a big stain on the front, as if someone had thrown a big bucket of tobacco juice at the door. They were flood marks, left from high rains. Julia said during the winter Venice floods about once a week and it’s a ritual for Venetians to take their first-floor furniture out on the narrow sidewalks to dry. It’s a big reason Venice is a dying city. It has a population under 60,000. In the height of the Venetian Empire, in the 16th century when the Venetian navy was the scourge of the Adriatic Sea, it had 170,000. When I first visited in 1978 there were 150,000. I wanted to put a sign on the back of my boat reading, “Will the last gondolier paddling outtatown please turn out the 18th century street lanterns?”

By all rights, a gondola should be the last man standing in Venice. The first documentation of gondolas is 1094 when Venice’s shallow mud flats required shallow boats for transportation. They later became the transport of choice of dignitaries and the wealthy. Meanwhile, 18th century drawings show the masses filling the canals in bateas like mine. Today, the gondola has evolved from one of the most time-honored traditions in the world to one of the world’s most sexist organizations. Of the 300 registered gondoliers, only one is a woman. She is German and, Julia said, she recently left town.

Italy’s corruption even creeps into this seemingly innocent corner of the peninsula. Gondoliers must pass a test for their license. One time, a champion rower actually failed while the son-in-law of one of the gondolier association officials actually qualified. Not that speed is important in piloting a gondola but you’d think Michael Schumacher could get a job driving a cab in Berlin.

Soon I started noticing my lovely surroundings, such as the said 18th century lanterns that give Venice its perpetual look from a more innocent century. On a hot, bright May day, they don’t add the same romantic touches as when their light paints swaths of soft stardust on the gentle water. In fact, during the 90 minutes I stroked, Venice’s romantic appeal was something akin to the Ganges River. I felt like I was on a slave ship.

Julia, God love her, encouraged me. Any stroke I did well, she applauded. “That’s it! You’re getting it!” she said in near perfect English diction. And, soon, she was right. I discovered that if I pushed the oar forward once I pulled it parallel to me instead of straining to put it behind me for more purchase, the boat went fairly smooth. Soon we were cruising past Venice’s apartments whose costs (an average one bedroom in Venice the size of mine in Rome, 485 square feet, costs about $225,000-$360,000) have not dropped with the mass exodus. I couldn’t help thinking how great it would be to have a view one of these pretty narrow, peaceful canals, far from the Americans in Yankees caps and Germans swigging Italian beer in St. Mark’s Square.


I’d just make sure my boat had a motor. Julia told me, as it turns out, that many of the old narrow boats now are motorboats and the oars became firewood. When it rains, and Venice gets 30 inches a year, the wooden oars become as unusable as a Louisville Slugger left in a pond.

Before I knew it, we had left the maze of canals and were in the Canale delle Fondamente Nuove, the body of water bordering the north end of Venice. Ahead of us was Isola di San Michele, site of Venice’s cemetery established under Napoleon. I wondered if Julia was trying to tell me something. Beyond that was the vast Adriatic Sea. San Michele looked far enough away to be Croatia.

Fortunately, we turned around and headed back, up a different canal. This time I got a feel for it. I noticed some quaint enotecas where I would later drink Spritz, Venice’s signature bright-orange drink made from Italian bitters, Prosecco and soda water in big round glasses half filled with ice. I passed grizzled Venetians in sleeveless shirts repairing docks from materials nearly tipping over their little work boats.

Meanwhile, my back ached and my right tricep felt twice as big as my left. I asked Julia, “You do this every day?”

“We only train for an hour,” she said. “These lessons usually only last 45 minutes for each person. But there was only one of you so we had you do the full 90 minutes.”

I gratefully docked the boat, gave Julia a handshake much weaker than hers and went searching for a cold beer. As I a passed a particularly secluded canal, a gondolier with a red-and-white-striped shirt and flat, pie-rimmed hat, whispered at swooning couples in an amorous Italian accent, “Gondola ride? Gondola ride? Would you like a pleasant ride on a gondola?”