LONDON — One day recently I went from Iran to South Africa, from Senegal to Bhutan. The next day I journeyed from Bolivia to Belarus, from Cyprus to Pakistan. I gazed at beautiful beaches in the Bahamas. I photographed a gorilla in Uganda. I discovered “The best kept secret in India.”

And I never left a building.

OK, so I didn’t rake in the airline miles. I attended last month’s World Travel Market in London where for the last 40 years nearly every country in the world tries seducing people into visiting them. From travel agents to hoteliers to journalists to bloggers to intrepid freelance travel writers like myself, the World Travel Market is one-stop shopping for all things travel.

The only countries I don’t remember seeing were North Korea, where the entire tourism department is a file folder in Pyongyang, and Paraguay, which became independent in 1811 and is still waiting for its first tourist. (Seriously, I’ve never met anyone who went to Paraguay as a traveler. In fact, I assume the airport in the capital of Asuncion only has departing flights. There are no arriving ones.)

There was Cuba. There was Mongolia. There was the Cape Verde Islands. Even little bitty San Marino was there, gamely managing a single desk in the Europe building.

I found places I never knew existed. Anyone been to Balochistan? Anyone heard of Balochistan? It’s a 7,000-year-old region in southwest Pakistan with 500 miles of coastline. How about Odisha? It’s a region on the East Coast of India with untouched beaches, 1,000 temples and national parks. It’s billed as “India’s best kept secret.”

I didn’t. I’ve been to 106 countries. It sounds like a lot but when I attended the World Travel Market I realized how much I haven’t seen. The world has 201 countries (classified as anyplace with at least partial recognition from the United Nations).

They all poured into the ExCeL exhibition center in southeast London next to the Royal Victoria Dock. In 2012 I came to ExCeL to cover women’s boxing during the Olympics but had no idea of the building’s true scale. It’s more than 1 million square feet over 100 acres.

It’s filled with makeshift pyramids from Egypt and temples from Indonesia, dancers from Thailand and one overworked man in a gorilla suit from Uganda. For two days I strolled around talking to people from about 50 countries, grabbing brochures from even more and eating snacks laid out to draw people in. Almonds from Uzbekistan. Chocolate from Russia. And some spice called

For someone as passionate about traveling as myself, I was like a drunk in a Scottish distillery. And I got shitfaced on ideas.

I came with a blank travel slate for 2020. I purposely held off booking anything until the WTF. I chatted. I interviewed. I took notes. And I kept an open mind. The very essence, the reason I feel traveling is the key to world peace, is opening yourself to new people and new ideas. Which is why I came up with my new No. 1 destination for next year.

OK, I know. The CIA says Saudi agents had a Saudi journalist killed although the prince said he knew nothing about it. Homosexuality is illegal. So is alcohol. But that’s the government. It’s not the people.

If people viewed countries only by their government, why would ANYONE visit the United States right now?

People are not the government. I’d never met anyone from Saudi Arabia before. I did at the WTM and listening convinced me that this will be my annual off-the-beaten path trip for 2020.

In fact, until October, the path to Saudi Arabia wasn’t beaten at all except for the Muslims’ annual pilgrimage to Mecca and occasional organized group tours.

On Oct. 27, the Saudi Arabian government opened its doors to the world. It started offering tourist visas. You can get them online in one minute. In the first week, 70,000 tourists poured into Saudi Arabia. I imagine that avalanche will slow as the year progresses but I want to be part of the first people to travel freely around the country before they start selling tickets to mosques. The government has a goal of 100 million visitors by 2030.

You can go where you want

Yes, Saudi officials in London said I can travel independently anywhere. I can eat in restaurants in Riyadh, scuba dive in the Red Sea and hike in the Asir mountains. Saudi Arabia may as well be California.

Saudi Arabia was the fifth booth I visited. It came after Iran (only group travel allowed), Palestine (another dream destination), Jordan (possible birthday present to my girlfriend) and Oman (desert camping and great beaches). Saudi Arabia had a simple stand in the Middle East section near the press center.

Standing behind a table stood Imad Sulaiman. He’s the managing director of Saudi Arabia’s Alshitaiwi Travel & Tourism (www.alshitaiwitours.com, admin@alshitaiwitours.com). Sulaiman is originally from Damascus, Syria, but has lived in Saudi Arabia for almost 30 years. His sons were born and raised in the country.

Unlike the rest of the countries, he didn’t have flashy brochures, CDs or giant tourist maps. What he had were words, words that convinced me that this is the perfect place for the intrepid traveler to start the next decade.

Tall and distinguished in a black suit, he offered me a cup of tea and told me about his country.

I’ve met Americans who lived in Saudi Arabia. They all worked for government or military agencies and stayed in American compounds. They sounded like hermetically sealed culture vacuums. A scuba diving buddy in Truk Lagoon had worked in Saudi for a couple of years and couldn’t give me one anecdote about meeting a local. 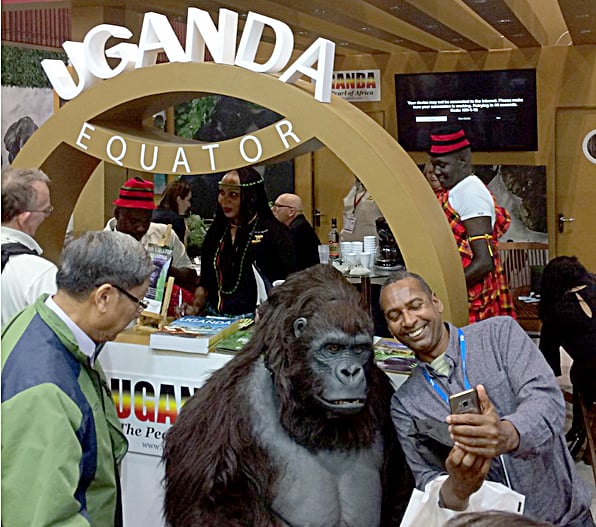 “The people that choose that, it’s their option,” he said. “But many, many foreigners live in regular apartments and regular villas.”

Saudi Arabia does seem open to adventure. The capital of Riyadh has grown into a sophisticated international city with great restaurants and glorious palaces. My uncle taught engineering in Jeddah during the 1960s and regaled our family with tales of the perfect blue (inappropriately named) Red Sea and beautiful beaches. I’m sure tourism hasn’t spoiled them yet. Then there are mountains by the Yemeni and Iraqi borders, the Nabataeans civilization of Maola’in Saleh (like Petra in Jordan without the crowds) and vast swaths of desert for camping and camel excursions.

Yes, it is hot

The other natural concern is heat. Saudi Arabia just

hot. I looked to go the first week in June, the first time my girlfriend had a full week off. The average temperature in Riyadh is 104. In Jeddah it’s 99 with 60-percent humidity.

In Saudi Arabia’s newly determined “tourist season” of October to March, the highs range from 72-95 in Riyadh to 84-95 in Jeddah and Jeddah’s humidity rarely drops below 60 percent.

I had to ask Sulaiman the magic question, one that has hovered over Saudi Arabia’s image for years: “Do you still cut hands off of shoplifters?”

“Yes. This is Islamic law,” he said. “If something happens that really affects the society, they should be punished. Since 100 years ago. This is not a new thing.”

He didn’t seem insulted by the question but quickly pointed out what I’ve harped about for decades. Don’t comment about a country until you’ve been there first.

“I used to work as a tour guide,” he said. “I used to guide groups. When you go around the center in the evening time, the people, especially the Americans, when they come, they feel uncomfortable, because they had the wrong information or image of the country. But they get there and experience how the people are. We walk after dinner at 11 o’clock. If anyone had a problem, the locals would come and run and support them.”

The other concern is the landscape for women travelers. Must my Marina wear an

, the full-length black cloak all Saudi women wear? No. Prince Mohammed bin Salman has loosened clothing restrictions on women, saying they should wear “decent, respectful clothing.” I’ve read where some Saudi women are wearing heels and colorful tops without harassment. One, however, was stopped from entering a mall. I’m told outside women would feel more comfortable in an

and not stand out.

Last year the government dropped the law against women driving and going out alone. Still, Saudi Arabia sounds like a long way from the open freedoms of Italy and the United States.

The Rick Steves of Saudi Arabia is Yousef Al Sudais. He’s a 32-year-old world traveler icon who has Saudi Arabia at the center of his social media galaxy. He started traveling 10 years ago and in seven years in the travel business has built up a following of 127,000 on Instagram (jo0sef)

Cosmopolitan magazine named him the Best Middle East Travel Influencer for 2018 and he’s a brand ambassador for Breitling Swiss watches, Four Seasons and Ritz-Carlton. He has collaborated with tourism boards in the United Kingdom, Germany, Switzerland and Austria among others. He travels the world for free and sleeps in luxury hotels when he’s not throwing himself out  of planes or off cliffs or drinking a coffee at the Versailles, all being filmed by his own videographer.

He spoke at the WTM while a screen behind him showed videos of his travels, some of which were shot by one of his battery-operated drones.

He began traveling out of Saudi Arabia well before masses traveled in. Now that the Saudi gates have opened, so are his arms to his followers. 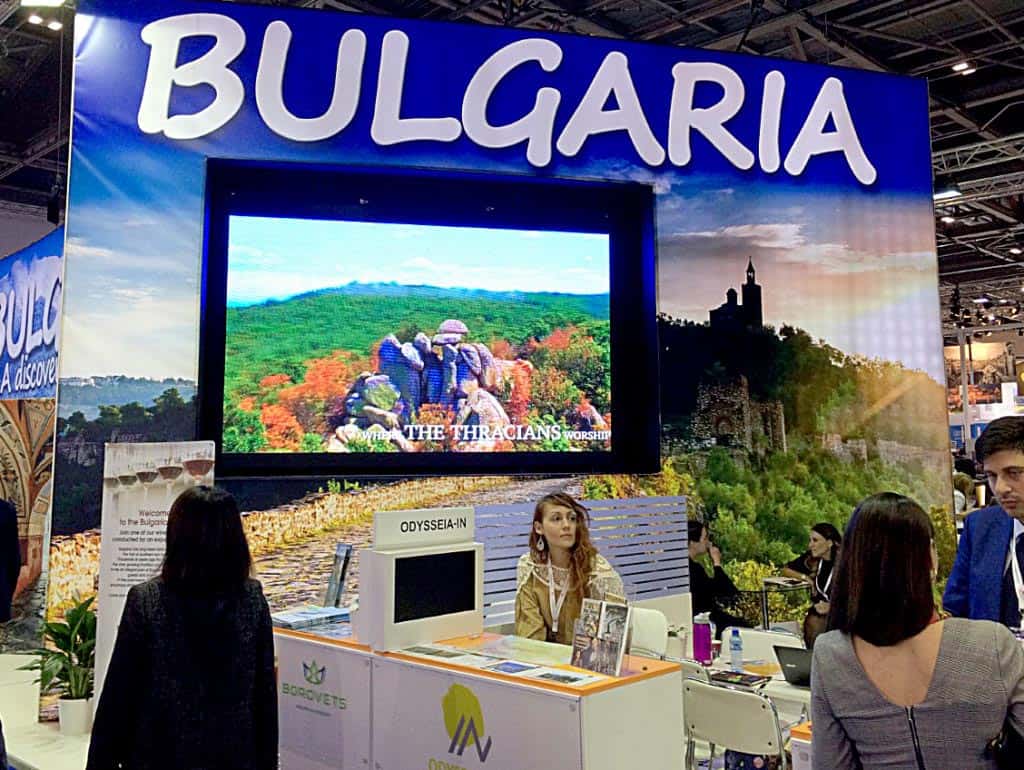 “These are all major reasons for traveling (to Saudi). Plus it has unseen and undiscovered places no one has ever heard of. There’s a good and huge reason for people who travel to Saudi to enjoy every part of it for whatever they travel for.”

While he spoke, his footage of Saudi on the wall made me want to go there tomorrow. Riyadh looked eerily romantic with its mosques and tastefully lit hotels. The Red Sea was so clear you could see for hundreds of meters underneath. And Maola’in Saleh looked like a Middle East version of Alice Rock.

The best part? In the footage I didn’t see another tourist.

Untouched, off the beaten path

“People around the world, they want to see the real experience without it being touristy,” he said. “When you go around the world and see a really beautiful place but see people lining up to take a picture or there are a lot of people selling stuff, it takes away beauty from the place.

“I think now is a good time to go to Saudi while it’s still real and so beautiful.”

It’s cheaper than the United Arab Emirates which we visited last month. We found a couple of four-star hotels in Riyadh for a little more than 200 euros for three nights. You can buy falafel for about $1. A local restaurant charges $10-25 per person. An average taxi ride is 5-10 euros.

A woman asked him about woman travelers. He talked about last year’s changes.

“Any woman can come now, alone, and even stay in a hotel alone,” he said. “We are more open. We want more visitors to come. One of my friends, she’s American and arrived in Saudi and said, ‘People stopped me on the road and said, “Welcome to Saudi Arabia.” I was so happy to see this. These are my people. This is my country. This is what I want to tell the whole world about.”