HAPUTALE, Sri Lanka — I’m on my balcony at 6:20 a.m. staring out at tea plantations cascading down into the mist. The plantations look like little individual green mountains. The mist is as thick as London fog. I just heard the muezzin’s Muslim call to prayer way off in the distance in town three kilometers away. Birds are chirping. Huge white lilacs and bright yellow and red wildflowers are blooming in the driveway below me.

I can see why Arthur C. Clarke chose to live in Sri Lanka in 1956 until he died in 2008. But how do you write about science fiction here when you’re already surrounded by fantasy?

For my last night in Haputale, I upgraded. This suite is well worth it at 4,000 rupees (about $30). It’s still in the resurrection stage. There is no furniture. No nightstand. No closet. My backpacks and clothes compressor are on the floor. There’s just a bed. But at least it’s a four-poster bed with a mosquito net, not thick enough to spoil the pretty but brief sunrise I woke up to a few minutes ago.


The Leisure Mountain View Holiday Inn is a great buy for $30 if you can stand the sounds of construction hammers pounding the concrete of future suites around you. The dirt lot outside the entrance is off putting, too. But the family and food, not to mention the view of Sri Lanka’s prettiest Hill Country, make up for it.

I had another remarkable walk in the Sri Lanka’s Hill Country yesterday. The Czech chicks (I know that sounds sexist but you can’t deny the cute alliteration) and I met at 5 a.m. and hiked to World’s End. It’s the high point of Horton Plains National Park, a vast, diverse landscape of looming mountains, vast plains, towering waterfalls, wild grasslands, thick forests, clear lakes and spectacular views. It’s only about 30 kilometers from Haputale but it took us an hour to reach by van which wound around precariously narrow, dark roads as it rose into the tea plantations.

Horton Plains is known for its wildlife: deer, wild boar, a purple-faced langur monkey. Even some leopards have been seen around here. When we got dropped off in a space packed with vans and tuktuks, a huge sambar deer stood there, as steady as a parking lot attendant. It seemed to be waiting for us. It must’ve weighed 1,500 pounds with antlers the size of a hotel’s hat rack. Its nose was running but he kept putting it in people’s faces. Then I learned why. People were feeding him their packed breakfasts. This deer had an incredible appetite for vegetable roti.


The hike was a nine-kilometer loop through the most diverse landscape I’ve ever seen. We started in wide-open brushlands that looked like the Serengeti in Tanzania. I wouldn’t have been surprised to see two lions mating. We looped west and steadily climbed higher into a small mountain range. We started before the afternoon mist arrived and saw brilliant views for hundreds of miles. Two of Sri Lanka’s three highest mountains, Kirigalpotta (2,395 meters) and Totapola (2,357), hovered overhead. In two kilometers we reached Mini World’s End, a wooden platform that overlooks the entire landscape. The mountains were the perfect backdrop for tea plantations as far as the eye could see. My God, I thought, they have enough tea here to feed China for six months.

In another 1,700 meters, most of it uphill, we reached Greater World’s End. Here we saw views you’d get from a 120-story building except without the guardrails. Travelers, including a busload of camera-clicking Japanese, precariously maneuvered along the embankments trying to get the best shots. Two women were showing each other their photos while their legs dangled over a ledge with an 880-meter drop. The view was worth it, though. And the temperature barely hit 70 degrees. With a nice cool breeze, I was arguably in the most comfortable spot in all of South Asia.

On the way back the trail turned uphill through a dense forest to Baker’s Falls, a gorgeous cascading line of water into a pool that looked clean enough to drink. The water in Horton’s is remarkably clean. We passed pristine rivers, sparkling lakes. We also passed numerous signs talking about the importance of clean water, similar to the ones in Lipton’s plantation, if less poetic.

Wildlife must love this place. We stopped by a bush where some Canadian tourists craned their necks and cameras. A green chameleon stood on a branch and was so camouflaged I needed a 10-year-old boy to point it out to me — right in front of my nose. I snapped about two dozen shots as he didn’t move, as if my camera was a python. 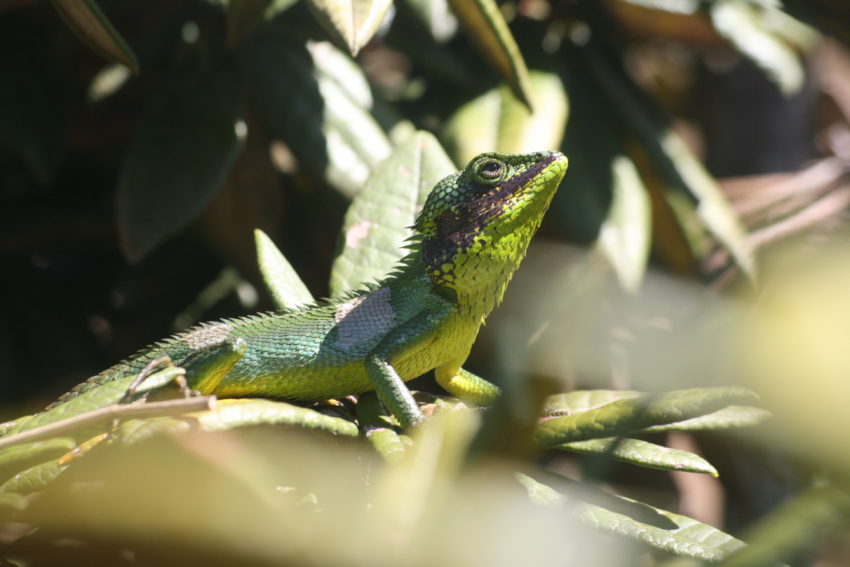 We came back to town and Kristiana and Jana took me to one of their finds. It was a bakery with a clean, neat restaurant on the second floor. I ordered a huge plate of biryanis: rice made with turmeric, garlic and cardamom with two big chunks of fried chicken in the middle. That and two cream sodas was all of 200 rp ($3).

A few words about Sri Lankan cuisine: It consists of seafood in the south and seemingly rice and curry everywhere else, including the south. I admit I long for some bucatini amatriciana from Da’ Bucatino, my neighborhood trattoria back in Rome. However, the family who runs this guesthouse puts a different spin on the curry every night, thanks to a region specializing in organic vegetables. Last night with the big pile of rice they laid out in little bowls: carrots and potatoes, snake god vegetable (a flat green bean), pumpkin, lentils, babyjack (a yellow mush), long bean (which starts out an arm’s length) and something called a banana leaf: crisp, black slivers that provide a sweet touch to the hot curry. You put little piles on various sections of rice and eat them one at a time or mix them for new tastes. It was absolutely sensational and very healthy.


It was the quietest meal I’ve ever had and, traveling alone most of my life, I’ve had a few. In what would be a great cover photo on a story about how modern technology has ruined the art of communication, I was joined at dinner by four couples: the two Czech chicks, another Czech couple, a French/Chinese couple and a gay Dutch couple. No one talked. They all pecked away at their iPhones, barely acknowledging each others’ existence — except when they showed something on their iPhones. They may have even been texting each other. Who knows? I sat there munching away, thinking of the mystical views and the crystalline waterfall.

And wishing I had the sambar deer for company.