Bolt reunion in Greece: He’s alive and well and didn’t remember us 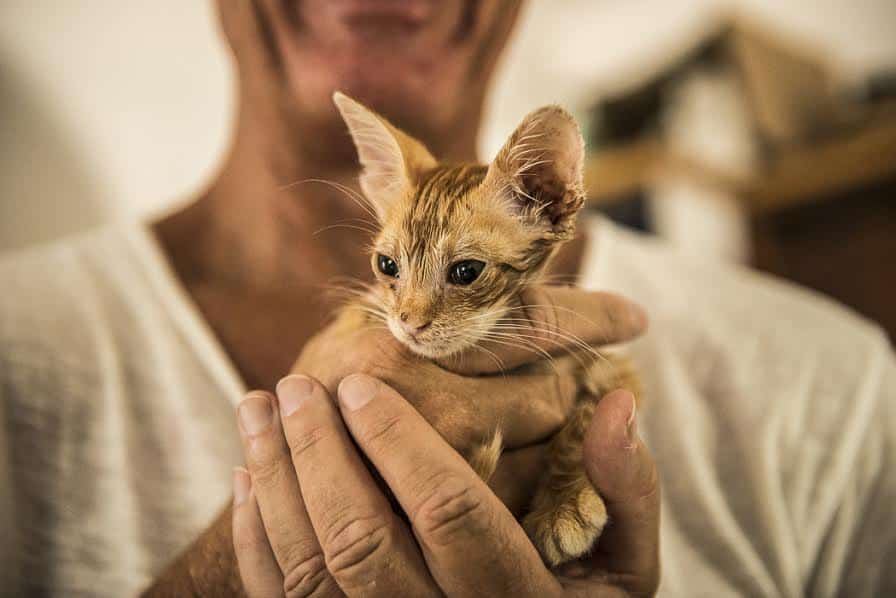 We found this month-old kitten near death atop a gutter on Skiathos three years ago. Today Bolt is thriving, with some bumps, at the Skiathos Cat Welfare Association. Marina Pascucci photos 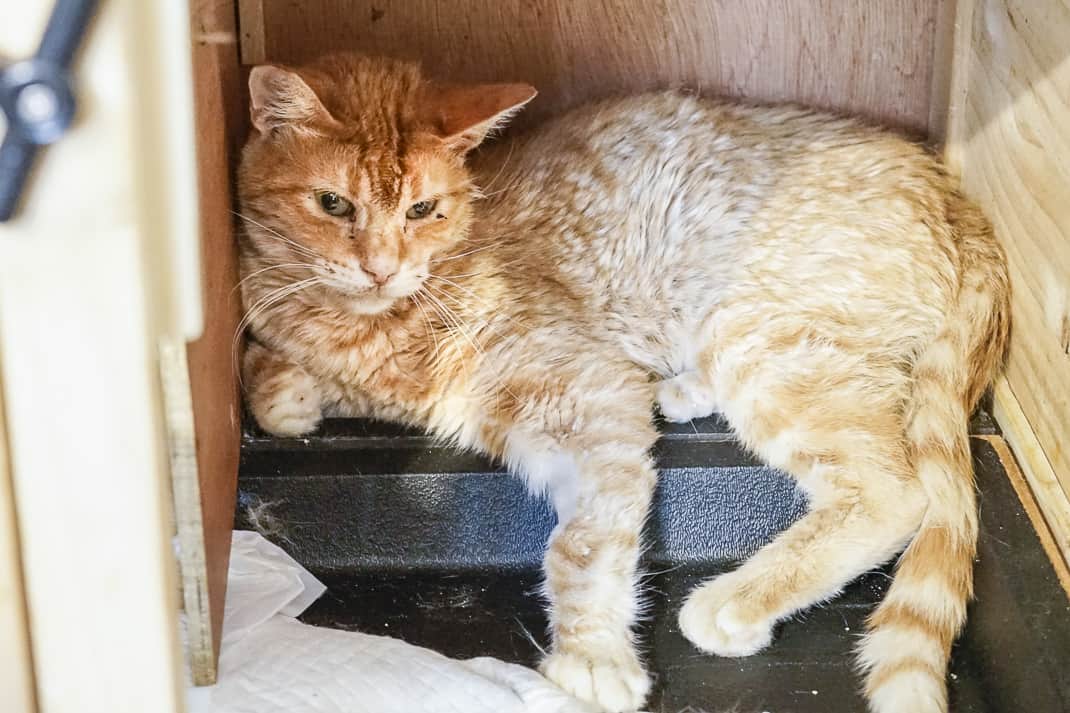 SKIATHOS, Greece – We were going to go viral.

I was sure of it. This reunion had all the trappings that pull on heartstrings, from Facebook links to the Animal Planet channel. Everyone would weep, including Marina and me. The setup was made for the big screen – well, at least, a little screen – and I’d practiced using my cell phone’s video camera beforehand.

Marina and I returned to Skiathos, the Greek island in the North Aegean, to see little Bolt, the kitten we saved from certain death atop a Skiathos gutter three years before. Bolt is alive and well in the same Skiathos Cat Welfare Association we left him.

I could picture it: We’d walk into the cat sanctuary’s giant yard and out of 150 cats, Bolt would race through the entire herd and jump into our arms, his memory flashing back to when he was a sick kitten, like a hidden dream finally uncovered.

Everyone remembers the viral video of the huge lion in Kenya jumping into the arms of his two Australian handlers who returned after rescuing him as a cub from a London department store cage. After 10 years away, the lion recognized them. The lion’s giant paws nearly engulfed their heads in affection. It brought tears to the world’s eyes.

Would Bolt be next? Let’s put it this way:

Picture a scowling couch potato when a solicitor visits. Bolt didn’t move. He didn’t blink an eye. We found him in a little cushioned bed by a shelter. He looked at us with all the enlightenment and excitement of a bored 3-year-old.

Forget Animal Planet. We just hoped Bolt would let us pet him. It took Sharon Hewing, the sanctuary’s founder and director, to pick him up by the scruff of his neck and hold him down while we precariously stroked his orange fur. Bolt struggled to break free.

Our reunion, the one we hoped would go video viral, lasted all of about three minutes. (see video).
“He’s not afraid of humans,” Sharon said. “He’s just afraid of new people.”

The back story, however, is quite touching. My blog from 2016 brought some readers to tears. I even welled up writing it. As we walked down the hill from our hotel to dinner, we found him motionless on a curb. His eyes were sealed shut from mucous. One leg was disfigured from infection. We took him back to our room. He licked a little milk off my finger and we put him in a warm basket with blankets. We hoped he wouldn’t die.

He didn’t. He hung in there and we took him to the sanctuary where Sharon did some medical magic and brought him back to life. By the time we left Skiathos a few days later, his eyes were open and he was eating normal food. We named him Bolt, for the champion sprinter we hoped he’d run like some day.

For three years we monitored his progress from afar. It was overwhelmingly positive. He had grown into his huge, bat-like ears. He played with the other cats. He ate normally. His infected leg didn’t seem like an issue. I sent occasional cash contributions earmarked for his care. The pictures we received, of him climbing a couch, eating with others, sleeping peacefully, warmed our hearts.

As Marina, who has saved many cats in her life, often tells me, “When you save a cat, you save the world.”

Unfortunately, our reunion was a combination bad timing and overly optimistic expectations. Before our mid-August arrival, one of the sanctuary’s volunteers, Chrissy Tuffin, wrote me saying, “I must warn you that Bolt doesn’t like being picked up or held. He’s not let me near him.”

We also happened to arrive the day he had five teeth pulled. Think it hurts for humans? It’s worse for cats. Bolt was mad at the world and we showed up. 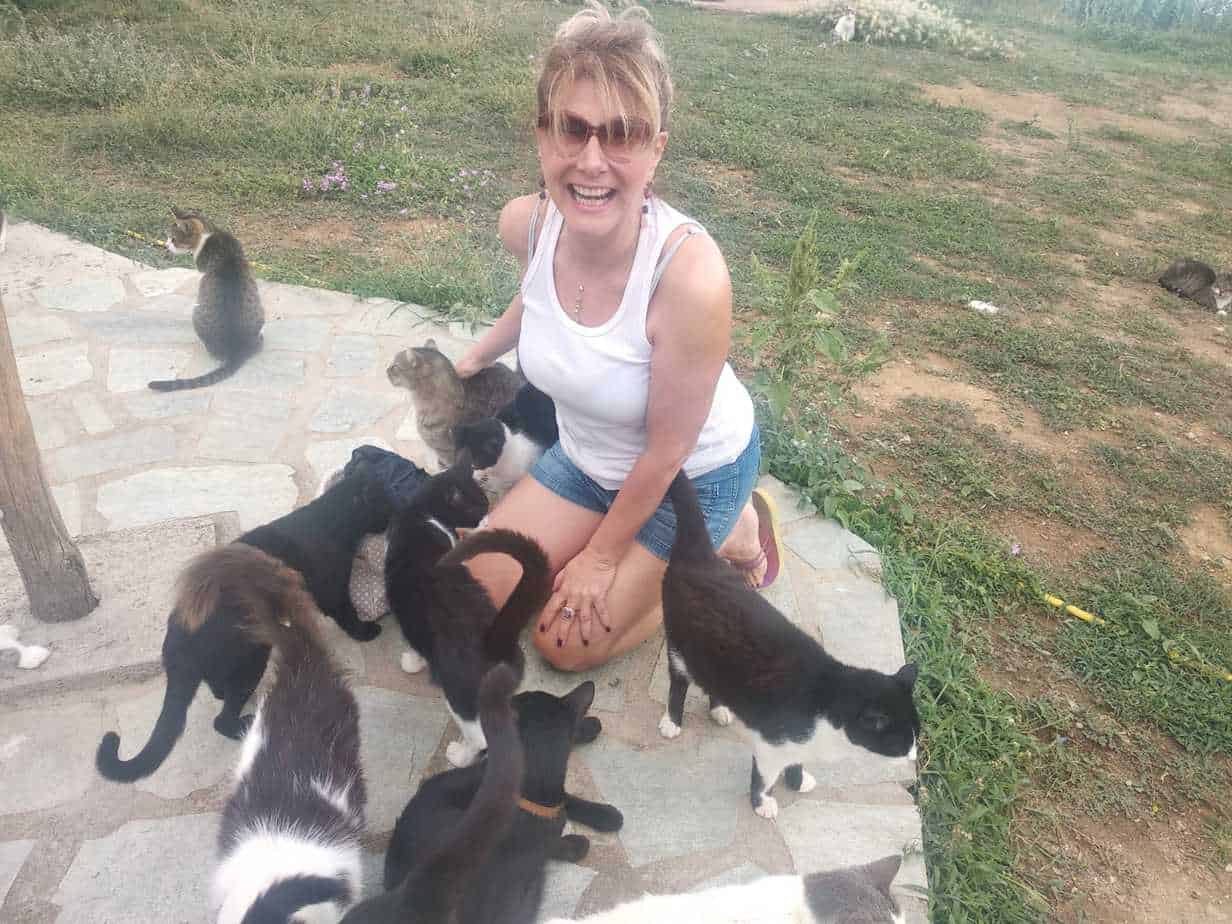 We let Bolt go to sit in the bushes alone and Sharon and I retreated to the privacy of her small house on the property. We had to weave through more than 150 cats who were playing, sleeping or rubbing against my leg in an attempt to seduce me into petting them. One cat kept nibbling on Marina’s neck.

Out of 150 cats, Bolt seemed the most unfriendly of them all.

“Not all are sociable,” Sharon told me. “About 10 percent you can’t get close to. I can go up to him but not strangers. It depends where they come from. Maybe they remember things that happened to them before I got them.”

If that’s the case, Bolt doesn’t remember Marina or me. No wonder. His eyes were sealed shut nearly the entire time. However, he does apparently remember the painful shots Chrissy gave him during those scary, iffy, first few days at the sanctuary.

“I’d give him shots and he’d scream!” Chrissy said. “I’d put food down and he’d run back in his cage because he knew he was safe there. It made me weep.”

However, at least he’s alive and relatively healthy. His right back leg looks normal but the infection left it useless. He’s essentially a three-legged cat although he’s the fastest three-legged cat in the Greek Islands.

“The leg’s no problem,” Sharon said. “Not at all. No issue. He runs as fast as the rest of them. When I go down to feed them in the morning, he’s one of those that runs from the top to the bottom because they get fed first. He’s very social with the other cats.”

Sharon and her volunteers are the real heroines in this story. Without them, Marina would still be weeping as she did in the restaurant the night we found Bolt. Originally from England, Sharon started the association after moving to Skiathos in 2004 and seeing the huge cat population on an island without even a vet, let alone a sanctuary. She works up to 18-hour days feeding cats, getting them to the one vet who did arrive and rescuing other cats abandoned by their mothers or evil swine with second homes here and no more need for a cat.

Two days before we arrived, a mother cat was killed by a car as her three kittens watched. Terrified, they hid in the bushes in a rainstorm. Sharon found them after two days and tried nursing the soaked kittens to health. Only one survived. Named Sophia, she sat on my lap and closed her eyes as I rubbed her tummy. She seemed to smile.

“That’s the best part of it,” Sharon said.

Since our first visit, Sharon has put a kiosk near the town center. People drop food and supplies for the association and the local government has put feeders all over town for the many strays still roaming the streets. It started a nutrient program and gives funds to the local vet for sterilization.

Her next goal is a new place. Her sanctuary has a beautiful view of the Aegean and a smaller house for kittens down the road isn’t far from a beach.

Still, she needs more space. She has money for a bigger sanctuary but the Greek paperwork makes the transition impossibly slow.

We visited Bolt two more times, both with the timing of a tsunami at a company picnic. He was down in the kitten house, inside the supply room resting in a cushioned cabinet. He just had blood tests taken and was still woozy from the pain killers.

I’ve had bad weeks before but Bolt happened to have one of his worst during our visit.

I tried luring him toward my hand, awaiting to caress him. He looked at it as if it was a zip-code directory. Fortunately, except needing medicine for a little feline immunodeficiency, his blood tests came back negative. 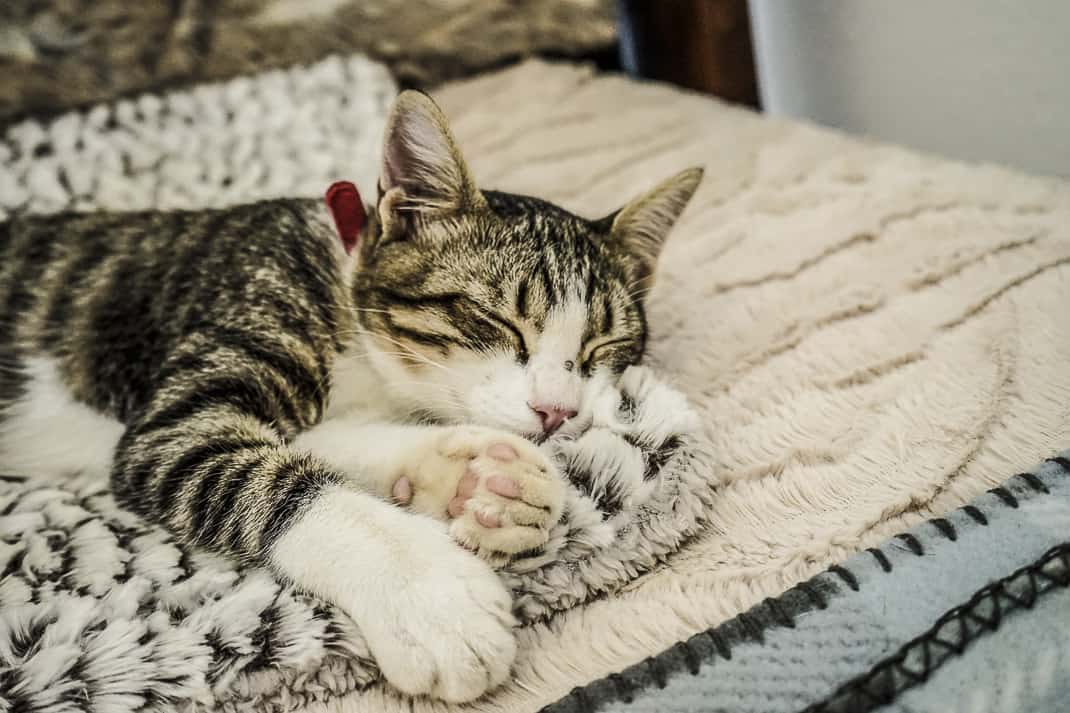 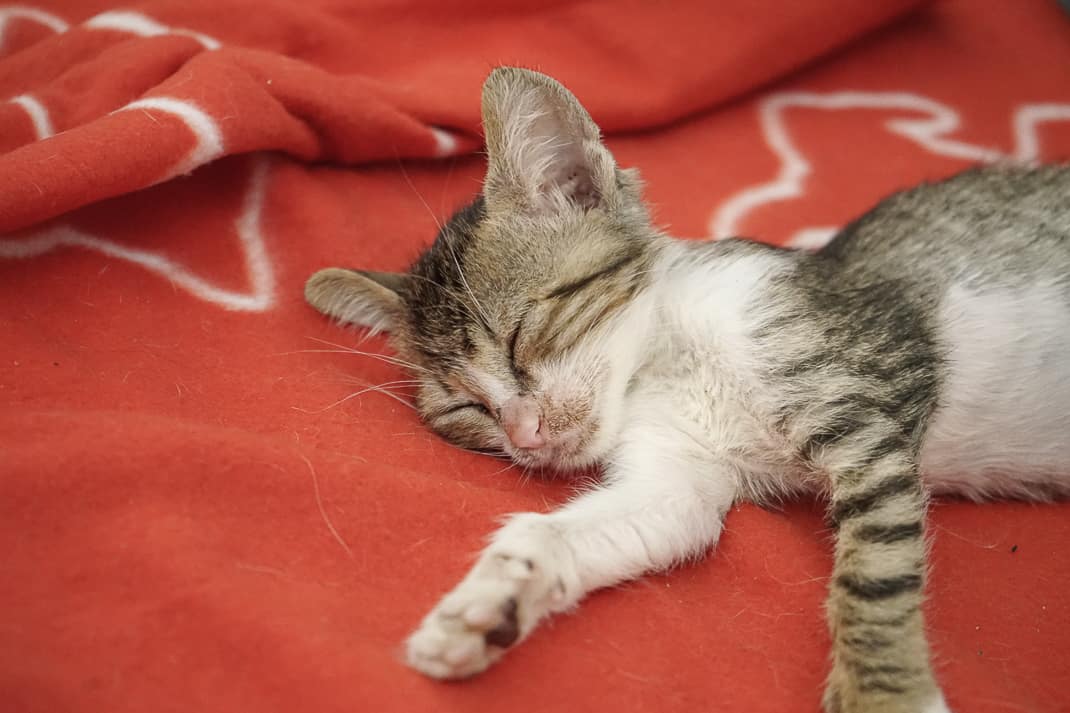 Marina and I wound up holding and caressing a wide array of fat, happy little kittens waiting for adoption. On that end, the association is booming. Sharon said this year so far people have adopted about 50. Many come from the United Kingdom. That’s not good. If Brexit passes Oct. 31, it will be nearly impossible to import cats from Greece.

No, I couldn’t adopt Bolt. I travel too much. In Rome I’ve had two top-floor apartments with way too much exposure and too many escape routes. In fact, I wondered if the sanctuary would be better for Bolt than someone’s home.

That night at a volunteers dinner in the lovely restaurant, Porta Rossa, ironically right across the street from our hotel, I met Nina Lobregt, the Dutch volunteer who helped care for Bolt for two weeks after we brought her in. She thinks they should amputate the leg. It still bothers him, she said. But more importantly, he could use a home.

“It’s strange because he was quite sociable with humans in the beginning,” Nina said. “He will be perfect in a home as the only cat. He gets the attention as the only one and he will change completely.”

Anyone out there want a three-legged cat from Greece? Or any other cat? Contact Sharon at her website: https://www.skiathos-cats.org.