Hadrian’s Villa: a day trip into the decadent opulence of Ancient Rome

TIVOLI, Italy — Sometimes Rome gets to me, kind of like too much fine wine. Yes, the most beautiful city in the world gets old in more than just age. A Roman outside my window leans on his horn for five minutes until the guy who double parked next to him comes out and moves his car. The garbage around my street’s packed dumpsters overflows onto the sidewalk. It’s so hot stray cats leave their marble perches in ancient ruins and check in at an Airbnb.

The global pandemic has limited travel here. Airlines have cut flights in and out of Italy. Quarantines are required returning from some countries. The threat of another lockdown constantly hovers over a very cautious government.

Still, it’s easy getting out and about around Rome. It’s a 3,000-year-old city famous for its surrounding sites, making day trips among the best ways to avoid the chaos and heat and get off the beaten path. There is Ostia Antica, Rome’s ancient port. Frascati is the center of the Lazio region’s booming wine industry. Castelli Romani is a string of small towns with castles and lakes and cultures all their own.

Somehow one of the greatest examples of decadent opulence from Ancient Rome escaped my attention, also nearby. Hadrian’s Villa is world famous among historians, architects and lovers who marvel at the complex’s wealth, structures and romantic setting.

On a steaming Thursday recently, Marina drove me in her Fiat Panda the 20 miles east of Rome to the town of Tivoli. Today it’s a pleasant town of 56,000 curled into the Sabine foothills and featuring terrific views of the Lazio countryside.

About 2,000 years ago, it was home to one of the grandest villas in Ancient Rome. Caesar Traianus Hadrianus, known as Hadrian, was one of Rome’s most benevolent and star-crossed emperors. He was five parts kind soul and five parts ruthless dictator. When he wasn’t helping upgrade the lives of Rome’s poor he was executing rivals without trial.

He also had a keen sense of architecture, style and luxury. His villa covers 250 acres, larger than the city of Pompeii. It had more than 30 buildings, 100 fountains, numerous swimming pools, countless statues, a bath house the size of a modern country club, a canal inspired by the River Nile and a nocturnal vestibule complete with skylight.

He had it built during his reign as emperor from 117-138 AD and it remains one of the best preserved ruins of Ancient Rome. It remains so beautiful, it seems sacrilege to call it a ruin.

To reach it, we left Rome on a 90-degree morning with 43-percent humidity and drove east along Via Tiburtina. In Hadrian’s day, that same road was a main drag Roman armies took to the Adriatic Sea to the east. Today it’s lined with pleasant villages with sidewalk trattorias and open-air produce stands.

American suburbia this is not.

The villa is on the edge of the modern town of Tivoli while the old town looks down from the hill above. The big parking lot at the entrance was nearly empty. Yes, the pandemic has poleaxed Italian tourism at every level. In three hours touring the villa, we saw maybe 10 other people. 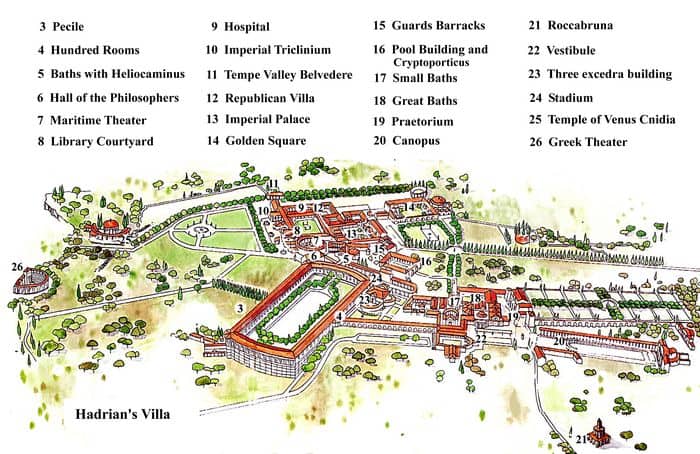 Better for us. Walking around the vast, green grounds, you really get a feel for what life of a Roman emperor was like. All emperors had villas. Hadrian, however, was different. He scoffed at the tradition of the villas offered up on Palatine Hill near the Roman Forum in the city. Instead, he chose this rich land in the countryside. His wife, Vibia Sabina, was the niece of Trajan, Hadrian’s predecessor on the throne, and it’s believed the land was part of the family’s property holdings.

Hadrian governed from here in his later years until his death in 138 AD at the age of 62.

Some interesting things you didn’t know about Hadrian:

Only one other person was in line before us at the ticket window and then we walked up the long, uphill road alone to the villa entrance. We passed a huge grove of olive trees that could supply olive oil to every restaurant in Lazio.

Hadrian’s Villa hits you like the Roman Forum without the tour groups. The first structure is Pecile, a long, stone structure where inside we found Hadrian’s swimming pool 215 meters long. One of the most magnificent gardens in Ancient Rome once surrounded this pool. Today it’s a gravel walkway where we strolled alone — all alone — past Mediterranean pine trees and views of the Roman valley below. Tivoli’s old town loomed above us.

The weather was mercifully cooler here at 770 feet and the pine trees, despite their narrow, statuesque build, offered proper shade.

We passed the Tre Esidre, a large hall where we get the term “et cetera (etc.)” as it consists of three semicircles open on all three sides. We found ourselves at the Grande Terme, Hadrian’s massive bath house. It consisted of a gymnasium, Turkish baths and a frigidarium for cooling off, all lined with mosaics and bricks. Some walls and the foundations of baths remain as do some of the mosaics.

The highlight of Hadrian’s Villa, however, is the Canopo. It’s personal. It was named after Canopus, the city where Antinous drowned. It’s another shallow pool 120 meters by 20 meters wide representing the Nile. It’s lined with statues with Egyptian themes such as the crocodile and Bes, the Egyptian dwarf and fertility god.

We walked around the pool, watching orange koi swim lazily along the surface. We climbed a mosaic staircase one floor and had a great view of the pool, the statues lined up like ancient sentries and the greenery beyond. We didn’t hear or see another soul.

“This place is dreamy,” Marina said.

This is the view Hadrian had 2,000 years ago. I wonder if his benevolence for Rome’s poor came from this over-the-top luxury he experienced here. I doubt it. His Piazza d’Oro (Gold Square) is another example. It’s a massive open, rectangular courtyard that once contained lush flower beds, a canal and a large gold octagonal vestibule.

Then there’s the serapeum where Hadrian entertained guests with open-air banquets where they dined while looking at a canal circling a small island in the center. Ionian columns still line the complex that included a maritime theater. Hadrian came here to relax and be alone.

Hadrian’s Villa reminds me a bit of the czars’ palaces in St. Petersburg, Russia. In the 19th century, the czars built massive palaces on islands in the archipelago. These were enormous architectural wonders. From one end to the other is about a 1,000-ruble cab ride. Their servants’ quarters were bigger than the house where I grew up. Meanwhile, you couldn’t find any pets in the city then because the starving proletariat ate them all. I tell people to go to St. Petersburg to see why communism happened, then go to Moscow to see why it failed.

Rome in the 2nd century was better off than Russia in the 19th.

Oddly, Hadrian wasn’t here much. More than any other Roman emperor, he preferred not to rule from the protection inside the Roman walls. He traveled. He went to the far ends of the empire, from what is now Persia to Great Britain, for a hands-on look at progress and regress. Instead of ruling like an overbearing general, he supported semi-autonomous urban communities with their own customs and laws. When he first became emperor, he cancelled all debt to the state, immediately earning popularity. He developed welfare programs.

He dealt with his armies fairly. He believed in slavery, as all of Rome did then, but outlawed executing slaves except for capital crimes.

He dealt with resurrections harshly. When he first attained the throne, he was informed of four senators opposing the succession and he had them executed.

He died in his other villa at Baiae, now Bacoli, on the Gulf of Naples. History remembers him with mixed reviews. Many traditional senators considered him too cosmopolitan and Greek for their liking (Greece even granted him citizenship) yet he made Rome’s inner city a more fair and glamorous place. He delayed the mass expansion that eventually led to the fall of the Roman Empire.

Edward Gibbons, an 18th century English historian and Parliament member who wrote “The History of the Decline and Fall of the Roman Empire” listed him among the empire’s “Five Good Emperors.” Yet his body was moved twice to hide it from vengeful enemies and was finally cremated with his ashes placed in Castel Sant’Angelo.

Afterward, Marina and I drove down the street to elegant Villa Esedra where we had lunch al fresco in a garden and I dined on straccetti tacchino (broad, ribbon-like pasta with turkey). Marina had scampi risotto (thick rice dish with prawns). We washed it down with cold beer, local white wine and Prosecco before working our way down the hills to broiling Rome.

To the Rome that Hadrian helped create.