They don’t have the fame of Piedmont or Tuscany. They don’t have the mass production of Abruzzo or Veneto. But Le Marche and Campania wines have carved a delicious niche in Italy’s massive wine scene. That’s similar to making Manchester City’s starting lineup.

I’ve always called Le Marche Tuscany Light. The region is so similar to its neighbor to the west but gets a fraction of the tourists (in 2018, 48 million visited Tuscany and 2 million visited Le Marche) and is much less expensive. Marche is like a famous model’s little sister who is almost as beautiful and isn’t nearly as high maintenance.

Americans know the Campania region for the Amalfi Coast, Naples and Capri. And they all know ol’ Mt. Vesuvius wiped out the bustling city of Pompeii nearly 2,000 years ago. But few know that volcano’s soil produces some of the most natural, biological (Translation: NO HANGOVERS!) wine in the world.

With wine tastings rebounding in Italy, I drank in all the wonders of Le Marche and Campania wines Sunday at Io Vino, the fifth annual celebration of wines from those regions. It was held at 11 a.m. which is never too early to drink wine in Italy. I’ve gone to wine tastings before breakfast.

Io Vino is the brainchild of Manilo Frattari and Romina Lombardi, a couple from Rome’s Lazio region who have promoted the wines from the two regions on opposite coasts for years.

“My parents love quality wines and have spent their time researching them,” said Serena Frattari, their daughter and fledgling winemaker. “The choice of Marche and Campania in particular concerns a personal taste as well as the fact that for them these regions have the best wines.”

They held the wine tasting at the Ergife Palace Hotel, a sprawling four-star confence center just north of Doria Pamphilj, the  huge park up the hill from me in Rome’s Monteverde neighborhood. In the basement conference room were tables from 80 wineries, all reserved for wine professionals and the media. 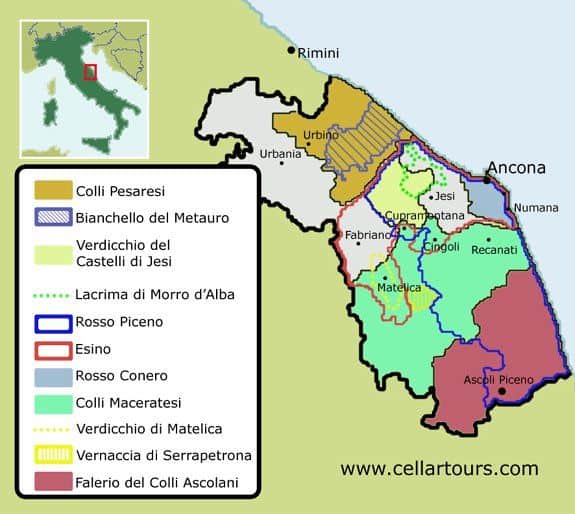 To know Le Marche and Campania wines you need to know two names: white Verdicchio in Le Marche and red Aglianico in Campania. Verdicchio has been around for centuries. Legend has it that the wine gave the soldiers under Alaric, famed commander of the Visigoths, courage to cross the Apennine Mountains and invade Rome in 408 A.D.

Rome fell and Verdicchio wine rose. But it wasn’t until the last few decades when it became well known and more recently with Americans who never seem to get out of Tuscany and the barrels of Chianti.

“Tuscan wines are more famous because Tuscans are more good in marketing,” said Matteo Pierucci, the wine ambassador and commercial director of Terracruda winery. “Le Marche has the same things as Tuscany. We have the sea. We have the mountains.  We have the history. And we’re less expensive.”

Le Marche’s landscape lends itself to ideal grape growing. Its rivers and valleys run perpendicular to the Adriatic Sea. It’s exposed to northeast winds and storms from the Balkans which are good for white grapes.

Nearly every Marche table had a Verdicchio and each one I would serve with my best meal. I am not a wine connoisseur. I can’t taste individual flavors in a wine off one sip any more than I can identify knobs on a 747. But the Verdiccio experts at Io Vino say you can taste almond, pear and green apple.

The Verdicchio Reserve is the one to get. You can even taste honey in it. The best part? The Verdicchio I tried from the Luca Cimarelli winery retails for only 24 euros.

That’s about as expensive wine as I saw Sunday. The vast majority were 10-14 euros. I fell in love with a Colle Bianco, a “dry, fresh and balanced” wine from the Verdicchio grape. The version at Edoardo Dottori Artigiano del Vino sells for only 13. Gagliardi Matelica’s 2020 Verdicchio sells for only 10 euros. Why so low? Ever seen the prices of an ad campaign?

You love wine but aren’t rich? Try Marche and Campania.

“We don’t pay for publicity,” said Ida Budetta, who owns Azienda San Giovanni in Campania with Mario Corrado. “Never. We prefer to communicate directly with people at the farm. This is the direct way to have a good balance between quality and price.”

Its reds are growing in popularity such as Montepulciano, Sangiovese, Vernaccia and Lacrima. 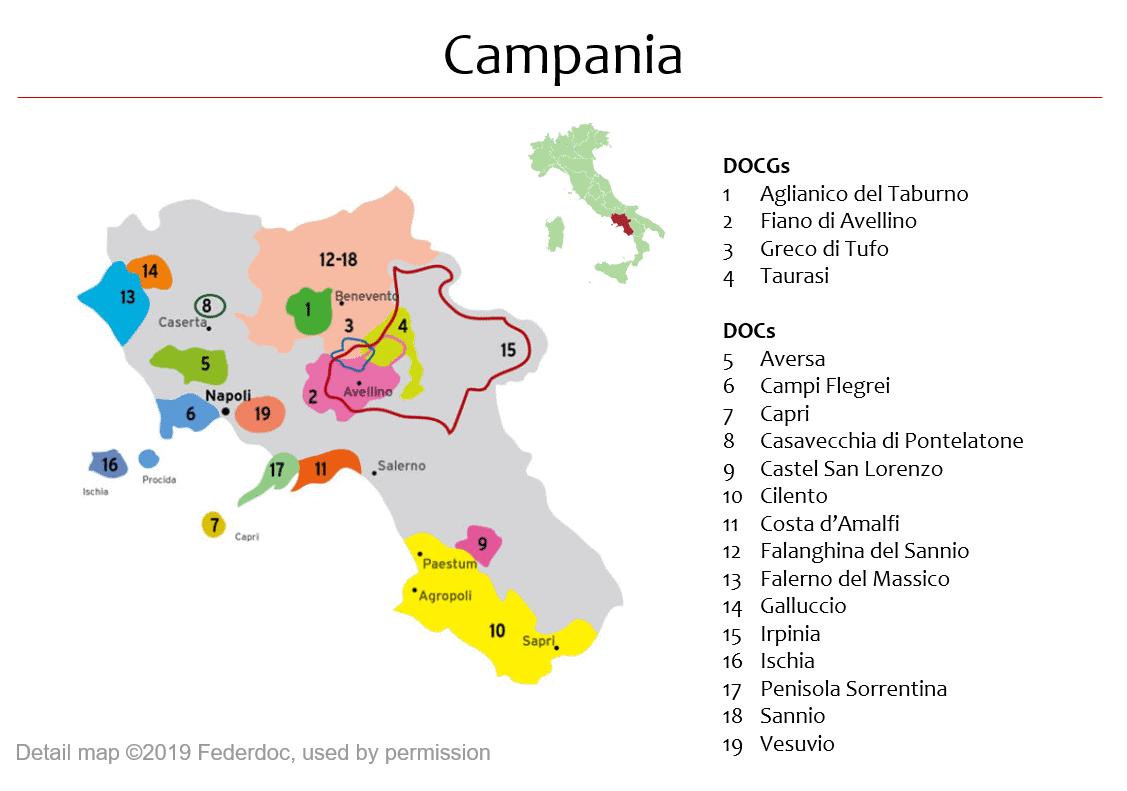 Anyone who has sat on their cliffside balcony in Positano overlooking the beach and the Tyrrhenian Sea or basked in the sun of Piazza Umberto on Capri probably had an Aglianico. If you were there and didn’t try it, you should have.

It’s worth a return trip.

Wine has been around Campania since before the Roman Empire. Look at the frescoes in the ruins of Pompeii and in Naples museums and you’ll see images of wine and goblets. Roman emperors and Pliny the Elder, the famed 1st century A.D. author, loved Falerno, arguably Italy’s oldest wine which is still around today.

Pompeii was a huge commercial wine center but it fell when the Roman Empire did. It collapsed again during the Middle Ages but returned during the Renaissance. Today, Aglianico is king, particularly around the towns of Avellino and Benevento.

Vineyards cover 93 square miles in Campania which is smaller than Connecticut. Aglianico leads four wines with DOCG status, the highest designation of quality in Italian wine, along with Taurasi, Greco di Tufo and Fiano di Avellino.

“Aglianico is very particular,” said Pino Cianciulli of Agricola Cianciulli. “It is very strong for many years. You need patience.”

The three wines I liked the most from Campania:

Any wine with Vesuvio or volcano on the label is a must try. Because of the natural properties in volcanic soil, these wines have very few sulfites and preservatives, the ingredients that give the wine a long life but also produce headaches.

When I meet wine experts, I always ask them the same question: Pretend you’re going to die tomorrow morning. What bottle of wine do you drink tonight?

It’s surprising how inexpensive their choices are. I asked around the room Sunday and many didn’t pick their own wines: