Monti Sibillini is Italy’s answer to New England in fall


ARQUATA DEL TRONTO, Italy — I tend to compare Italy to the U.S. a lot. It’s not really a fair comparison — to the U.S., particularly when I’m doing the comparing. I give Italy the nod on so many subjects important to me: quality of life, stress level, food, wine, health, kindness, liberalism, racism. Even Italy’s suburbs are nicer. The beauty of Italy is astounding, from old towns in Sicily dating back to Ancient Greece to the snow-capped Dolomites near the Austrian border.

One area in the U.S. where beauty ranks among the most spectacular in the world: New England in fall. The stories are true. The crowds are worth it. The golds, the oranges, the reds, the browns, the greens, the foliage in New England is something Monet couldn’t duplicate with paint and brush. Well, I found a place in Italy that does a pretty fair impersonation of New England in fall.

It may not have New England’s rainbow of colors but its purples, maroons and yellows are a great way to usher in the summer in Italy. I just returned from three days in one of many areas of Italy that Americans have not overrun. The 270-square-mile park straddles the underrated regions of Umbria and Le Marche east of Tuscany. Sibillini has massive green meadows stretching between mountains bearing trees with multi-colored leaves. Purple, red and yellow wildflowers line a hiking path that forms a 75-mile loop around the entire park. Spaced somewhat evenly around the park are nine rifugios, an Italian shelter with great beds and fantastic meals. 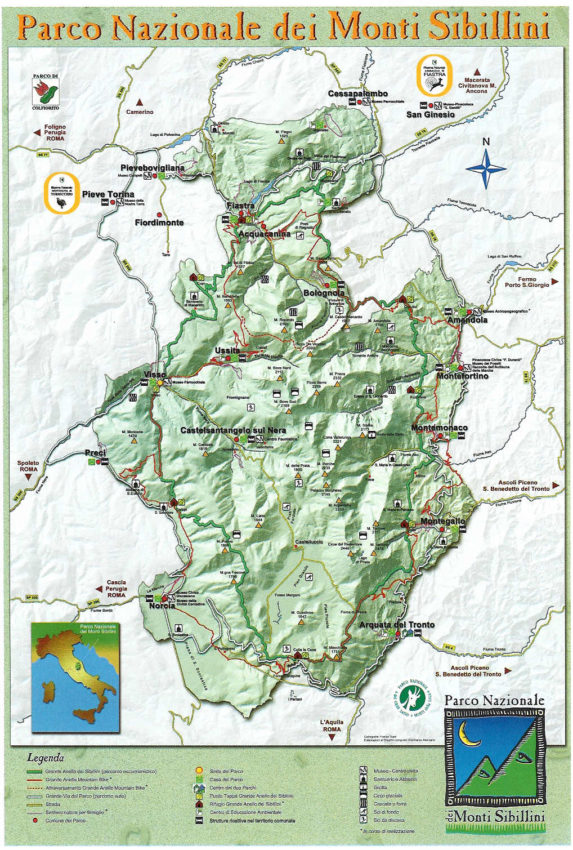 Locals told me that in the last week of June the wildflowers explode in an array of colors. The pictures on walls of cafes, restaurants and rifugios made it look like Mother Nature decorated the meadows with a giant paint brush instead of planted flowers.

It was blissfully cool, void of many visitors and at the end of the trip, a visit to the delightful Umbrian town of Norcia introduced me to the best sausage in Italy. If you didn’t know, that’s like the best painting in Italy.

You don’t need a car, but it helps. I met two friends from California at Roma-Fiumicino Airport and we rented a car for a three-hour drive north. You can get close to most of the rifugios by taking a bus from Ascoli Piceno, the Marche town famous for its stuffed fried olive, to small towns in the park then taking a taxi or arranging for a rifugio host to pick you up.


We did it the easier but more expensive way. It was worth the extra price to stop on the windy road up to 4,900 feet to take photos of the green panoramic landscape down below. Each turn provided a better aerial view of the quilt-like farmland nestled at the foot of mountains descending from the Apennine Range. Each stop the temperature became mercifully cooler after experiencing rising temperatures in Rome into the 80s last week.

Dating back to the 6th century and the papal states, Arquata del Tronto is nothing more than a principality of about 1,300 people. The Rifugio Colle Le Cese is 15 minutes southwest of town on the Umbria-Le Marche border. As we drove up a long service road off the main drag, we saw a big wooden A-frame lodge in the middle of a massive meadow. It was sided by collage of maroon, brown and orange trees. Mont Guaidone, craggy and rounded and 5,435 feet, stood out as the perfect backdrop.


Monti Sibillini’s rifugio system is similar to many hut networks in mountain areas around the world. Colorado, where I lived from 1990-2014, has the 10th Mountain Division Huts which the army division built 34 huts connecting 350 miles when they trained in the area during World War II. Two summers ago I hiked for 30 miles over four days through Slovakia’s High Tatras, staying in similar huts along the way. The difference is Slovakia’s huts are packed. Rifugio Colle Le Cese was nearly empty when we arrived in early afternoon.

Running Colle Le Cese is Roberto, a fit, bald, pleasant man in his 40s who looks like he’s hiked the loop once or twice. He greeted me with a glass of luscious red Le Marche wine and a little rundown on the park. You can make the entire loop, called the anello (“ring” in Italian), in nine days, staying in a different rifugio every night. The prices are manageable. His rifugio’s spacious room with a queen-sized bed and a single was 58 euros a person per night. The only other people staying Wednesday were an older English couple who were on day five of the nine-day trek. Over a terrific dinner of pasta with porcini mushrooms and a mixed grill of sausage, ribs and pork steak, they told us the hiking has been remarkable. Void of crowds, you had the well-marked trails practically to yourself. A tour of the Roman Forum in summer this was not. The next night, a group of 10 from Bologna poured in talking about a couple stages in the north offering some withering challenges. Between glasses of Marche wine and Italian artisan beer, they Italian soccer, Italian food and American politics. If you don’t like Donald Trump, come to Italy. You won’t find any supporters here. And you’ll hear some pretty good jokes.


Anxious to get started, I took a swift hike behind the rifugio. On an overcast afternoon, wispy clouds hung below the top of Mont Guaidone. A vast valley stretched below into the foothills. Braying mules grazed on the incline. For those particularly sedentary, you can rent a mule from the Mulattiera to shepherd you along the trail. (For your own reputation, it’s advised not to post photos of yourself on Facebook.)

But below was one of Italy’s great environmental triumphs. The government established Monti Sibillini in 1993 to promote environmental awareness and protect an area that nearly matches Italy’s artwork in beauty. In this area just a bit larger than Singapore are 1,800 different species of flowers. They have spotted 50 species of mammals including the wildcat, marten and roe deer. There are 150 species of birds including the golden eagle, eagle owl and snow finch. I could do without seeing a viper. But it’s apparently here, too.

The next morning, we filled a daypack with water, fruit, chocolate and salami and cheese sandwiches provided by the rifugio and headed south. It was cool, gray and drizzly, the kind of weather where you can walk all day if you can put up with the clouded views. But even a slate gray sky couldn’t hide the colors of the forest. We walked along a rolling, easy path above a layer of mist hanging below the hills across the meadow. Horses grazed. Mothers nuzzled their colts. The only sounds were a few birds and our own shoes along the dirt path. It was as far from Rome’s maddening tourist crowds as you can imagine yet we were only a three-hour car ride away. After nearly 3,000 years of civilization, the Italian peninsula still has wilderness.


After an hour, we came across the Lagi Pantani, a series of small lakes that looked more like watering holes. We came across an elderly local man gathering wild mushrooms in a big wicker basket. Two park rangers reassuring us we could find our car in the fog had the only car we saw all morning.

With only another day at our disposal and feeling the raindrops pounding heavier on our raincoats, we hopped in the car and did a two-day whirlwind tour of Monti Sibillini. The park is peppered with mountain villages, such as Castelluccio where we stopped in a cafe and sampled the sausage and cheese they laid out on the counter all day.

This region is not only famous for its sausage, but also it has the best lentils in Italy and arguably the world. Lentils grow all through the meadows in Sibillini, making it one of the local diet staples. I lived on lentil soup during a 17-day trek in Nepal. This lentil soup is better. At Pizzeria Sibilla (Yes, even pizza joints here carry lentil soup), the zuppa di lenticche was the best of my life. So thick with lentils, it looked and tasted more like a stew. It’s the perfect elixir for gray, drizzly day in the Italian mountains.

We ventured north to Visso, the governing seat for Sibillini. Visso is tucked into a narrow canyon with potted plants and trees lining narrow streets, the great place for an afternoon coffee.


On the way to the Spoleto train station the next day, we made the ubiquitous pilgrimmage to Norcia. Not that sausage is big in Norcia, but there seemed as many sausage shops as there are pizzerias in Rome. Every one had heads of dead boars staring out at us from around the doors, like a giant outdoor trophy case. In central Italy, wild boars breed like steroid-crazed bunnies and without a hunting season they’d overrun the entire country, including government (though some cynical Italian friends say they already have). They also make great sausage. By the time we sat down at L’Osteria Alliete, I’d filled myself with so many samples I didn’t know if I could eat. However, the homemade rigatoncini (little tube noodles) covered in a thick white sauce of pecorino and ricotta cheeses and bits of salami was the ideal end to three days of visual and gastronomical excellence.

I’m making plans to return some June, during the week when the wildflowers make the park look like a watercolor painting. Maybe I’ll do four or five stages and fill myself with so much sausage I’ll oink all the way back to Rome. It isn’t New England. But America isn’t Italy. Monti Sibillini just gave me another reason why I’m glad I’m here.