(Editor’s note: This is the first of a three-part series on the Spanish island of Mallorca. Today: Palma de Mallorca.)

PALMA DE MALLORCA, Spain — I stood at the back of one of the most iconic buildings in Spain, soaked to the marrow from a pounding rainstorm. The Cathedral de Mallorca is an architectural masterpiece, a skyline of towering golden spires shadowing a man-made canal and the Mediterranean Sea beyond.

Instead of the incredible view before me, my main thought was my 25-year-old raincoat was not not only ugly but it no longer worked.

The island of Mallorca will never be on anyone’s off-the-beaten-path list but in November it could be. It’s a path worth beating, and I did for a week. I saw a side of Mallorca few see outside the beaches and bars in the wild summer months.

Why Mallorca in November? 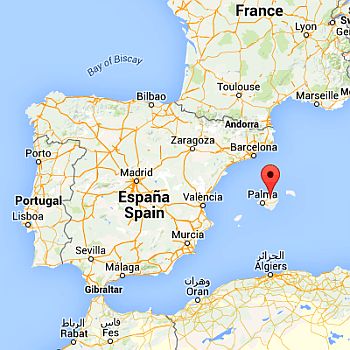 What was I doing in rainy Mallorca in November? I came last week for Traverse21, a travel bloggers conference that introduced us to different aspects of the island. The only beach I saw was on my many walks along the spectacular boardwork between the cathedral and sea.

The beach was empty sans a couple of people staring out and bracing themselves against a cold wind.

It rained every day. Locals said it’s the most it rained in Mallorca in 25 years. Climate change deniers can contemplate that testimonial. However, I didn’t care. Unless I’m at a beach, weather is a non factor in my travels. Even in sunny weather, Mallorca in November is in the 50s.

The Polish composer Frederic Chopin found out this the hard way. He and his lover, the French female writer George Sand, moved here in November 1838 on the advice of Chopin’s doctor who thought a sunny Spanish isle would be good for his weak chest. Instead, the weather was brutal.

As the Independent wrote about Chopin’s time in Mallorca, “The weather in winter can be foul, despite being in southern Europe. A biting north wind, combined with prolonged periods of rain, is common, especially in the hills.”

Chopin was later diagnosed with tuberculosis but soon the couple grew to love Mallorca in the off season. In her book “A Winter in Mallorca,” Sand wrote, “It is one of those views that completely overwhelm one [sic], for it leaves nothing to be desired and nothing to the imagination. All that a poet or a painter might dream of, Nature has created here.”

I agree. I didn’t get a tan and only got wet from the rain but learned to appreciate this island in November. The first thing I did, as I usually do, is explore the capital.

Palma de Mallorca, not to be confused with La Palma in Spain’s Canary Islands, is much bigger than I thought. It has 472,000 people, more than half the island’s population. They’re spread out over six miles of coastline and one of the biggest marina’s I’ve ever seen. Boats from small fishing boats to yachts to super yachts the size of four-star hotels and just as luxurious are jammed from port to starboard.

Living in Rome, the passeggiata (stroll) has become a regular pastime. One of the great passeggiate I’ve ever had is along Palma’s boardwalk. The cathedral, towering 44 meters above me, is on my left as I walked past a long string of palm trees with the Mediterranean on my right. I had to lean into the wind but the view, even under cloud cover, I will remember forever.

The best part about Mallorca in November is the summer tourist mobs are nowhere to be found. A cab driver told me tourists now are 10 percent of what they are in summer. If you want to live like a Mallorcan, this is the time to come.

Palma’s bustling city center only had locals. I think I saw three tour groups the entire week. I was one of them.

Matteo, a local tour guide, took Max Hartshorne, director of GoNomad.com, and me on a city tour through Palma’s narrow, windy, cobblestone streets, its romantic tree-lined rampla and, of course, the landmark cathedral.

We met in front of city hall, a sandstone building built in 1600 with an ornate, iron balcony, a common sight in downtown Palma. He gave us a long rundown of Palma’s  history. The Romans founded the city in 123 B.C. and used it as a port for their voyages to Carthage and mainland Spain.

The Moors governed Mallorca from 902-1229 and made Palma the capital. After centuries of piracy around the island, James I of Aragon conquered it in 1230 and named it for Spain. The Inquisition persecuted the island’s Jews in the late 17th century and it remained a sleepy little island until tourism hit in the 1950s.

Much of Palma’s history is still on display.  Matteo took us down windy — and rainy — alleys to palaces with tiled courtyards under skylights and big inside balconies. These are homes built in the 17th century still occupied by families.

We walked down Passeig del Born, Palma’s grandest boulevard, similar to the ramplas in Madrid and Barcelona. It’s a tranquil two-kilometer-long pedestrian street lined with towering trees and a beautiful fountain. It’s also where they beheaded Moorish pirates centuries ago.

Today are such stores as Zara, Louis Vuitton and Max Mara.

I asked Matteo why I saw so many sculptures of black bats around the center, such as on the obelisk on Plaza de Tortugas (Turtle Square), supported by four turtles and dedicated to Crown Princess Isabel in 1833.

The bat was admired by the Knights Templars, a Catholic military order founded in the 12th century who lived on Mallorca in the 13th century fighting off the Moors. The Templars believed drinking bat blood gave them energy.

Said Matteo: “When I talk to young people, I say, ‘With the blood of a bat, you can mix with a beverage and you can drink that and have energy and confidence! It’s like Red Bull!’”

The crown jewel of Mallorca and one of the top attractions in Spain is the Cathedral de Mallorca. Started in the 13th century and completed in the 1630s, the cathedral has two side rooms filled with gifts to the church such as a 170-kilo silver candelabra that stands more than 8 feet high.

The 120-meter-long cathedral has a series of 24-meter-tall columns and a round stained-glass window that’s 90 square meters featuring 1,236 pieces of turquoise, red, blue and yellow pieces of glass.

But why this cathedral stands out is the Chapel of the Blessed Sacrament,  built in 2007 with 2,000 square meters of clay by Mallorcan painter Miquel Barcelo. One wall is embedded with food symbols such as lemons, mushrooms and grapes. On the opposite wall are fish from the Mediterranean. Between them is a long swath of black artwork with white, flowing lines from a long post, allegedly representing the bottom of the ocean floor.

“It looks like the house of Dracula,” Matteo said.

We walked outside and stood looking out at the sea as rain drenched us. We looked out at one of the most picturesque views of Mallorca: a park with a man made canal, a motorway and the sea beyond. Until 1971, however, this was all concrete.

With my head full of an inordinate amount of history for one island, we walked through the Plaza Mayor. In summer, this place is packed cheek to jowl but on a rainy Tuesday in November, we walked nearly alone past Christmas markets hawking beautiful clay pieces of native scenes such as bakers surrounded by an oven and mini baked goods.

We decided to buy Matteo lunch — if he took us to an authentic Mallorcan eatery. He came through again. Celler sa Premsa has been around since 1930 and was once next to Palma’s bullring. The bullring left to the outskirts decades ago but the walls are still lined with old bullfighting posters dating back to the mid-60s.  It also has a giant wine press and 8-foot-high barrels of wine sticking out from walls.

This was as authentic as it gets. No English menus. All local businessmen and women in for lunch. All Mallorcan dishes such as sopas mallorquinas (soup with bread and vegetables) and pollo al ajillo (chicken and garlic), two huge balls of chicken covered in a rich garlic sauce. Chased with a carafe of Mallorcan red wine (more on that Friday), it was as good a meal as I’ve had anywhere in Spain.

Mallorcan cuisine leans heavily toward meats. On my first night, I took a cab up into the hills above the city. Casa Jacinto is a big, sprawling, brightly lit dining room with iron chandeliers and a beige decor. The menu featured everything from acorn-fed Iberian black angus steak to suckling lamb. I had beef tenderloin wrapped in bacon and topped with a big slab of goat cheese and blueberries.

Fat and happy with a lot of meat and too much wine from the conference’s endless string of parties, I poured myself into a sidewalk cafe. Meraki Cafe is on a quiet pedestrian street covered with outdoor tables. I whiled away an afternoon with some glasses of white Mallorcan wine and watched the fashionable men and women walk by.

I could’ve been in the trendy Chueca neighborhood of Madrid. But I was on an island in the middle of the Mediterranean, huddled in my raincoat against the wind. No beach was in my immediate future. Still, I could see how Chopin wrote beautiful music here.

How to get there: RyanAir has round-trip flights from Madrid starting at 57 euros. However, RyanAir also charges for any bags and sometimes seats.

When to go: Average temperatures in November are 50s and low 60s with about six days of rain. (I received all six.) In July it’s 70-85 with no rain.

Where to stay: BQ Augusta, Corb Mari 22, 34-971-700-813, BQ Hoteles: Mallorca or Andalusia, Augusta@bqhotels.com. I paid 68 euros a night. In July it jumps to 260 euros for a minimum two-night stay. Beautiful four-star hotel with a wonderful buffet breakfast but a 7-10 euro taxi to the city center.